(Minghui.org) Today's news from China includes incidents of persecution that took place in 16 cities or counties in 11 provinces. In the report, 13 Falun Gong practitioners were subjected to mistreatment during their detention, and at least 10 practitioners were illegally arrested. 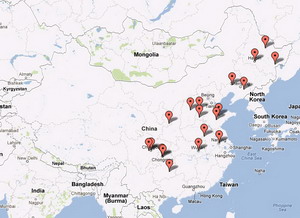 Ms. Guo Jingfen from Yilan County was sent to the Harbin City Drug Rehabilitation Center (used as a detention center) on the morning of August 1, 2012.

Zhang Yingduo, Song Yuzhe and Hao Jianfei from the Yilan County Domestic Security Division went to her place of detention on July 31, 2012, and abused Ms. Zuo Xianfeng in order to extort a confession. They pulled her hair with force, slapped her, and caused her face to become swollen.

Ms. Zheng Hongli from the Jinshantun Forestry Bureau of Yichun City was taken to the Yichun Brainwashing Center by officers from the Tuanjie Police Station, Jinshantun on June 29, 2012. She has been held there for a month and is in delicate health.

Ms. Fan Juncao, 69, is from Gongfan Village, Xinning Town, Ning County, Qingyang City. She went to Beijing at the end of July 2012, and displayed a banner about Falun Gong in Tiananmen Square. Police officers threw her down to the ground and then took her to the Qingyang Liaison Office in Beijing. Officers from the Ning County Domestic Security Division were given orders to take her back to Ning County. Ms. Fan was sent to the county detention center on August 1, 2012.

Ms. Kang Shuqin from Taiyuan City, 65, has been held in the 10th Squadron of the Shanxi Provincial Women's Prison for ten years. Because of her refusal to give up her faith in Truthfulness-Compassion-Forbearance, she was cruelly tortured in the prison. She was held in solitary confinement, deprived of sleep, fed with food mixed with drugs, among other abuses. Her back was once severely twisted while she was doing forced labor. However, proper treatment was not given to her. Both her mind and body were hurt badly as a result.

At present, the prison authorities force Ms. Kang to sit on a small wooden bench for the whole day straight. They also limit or reduce her break times and torture her physically in disguised forms. As a result, her complexion is sallow and she is very weak. Her back hurts severely and she can hardly open her eyes. Her mind seems to be wandering and she responds slowly.

Ms. Ren Guifen from Shouguang City, who is disabled, was arrested by officers from the Chengqu Police Station and the Shouguang City Domestic Security Division on the morning August 2, 2012. Her cell phone was confiscated.

Ms. Bai Zhengai from Yiyuan was arrested in the Children's Amusement Park on the evening of July 16, 2012. Ms. Ge Jinghong, an employee at Ruiyang Pharmaceuticals Co, Ltd. In Yiyuan, was arrested on July 19, 2012. Both are being held in the Zhangdian Detention Center.

Mr. Li Qiang was arrested for explaining the facts about Falun Gong to a person who turned Mr. Li in to the police in order to avoid paying back a debt that he owed to Mr. Li.

Ms. Li Shelian is 48 and lives in Huanggangu Village. Over ten officers including Jiang Sheliang from the Chewang Police Station in Wei County barged into her home on the evening of August 1, 2012 and arrested her. Her son was taken to the Chewang Town Police Station as well while he was trying to protect his mother. Four or five officers stuffed Ms. Li's husband into a police vehicle, but were not able to close the door as Ms. Li's sister-in-law held him firmly and wouldn't let the officers take him away. They had no choice but to leave him alone.

The police then ransacked Ms. Li's home and confiscated a computer, two printers and other items. Ms. Li and her son were taken to the Wei County Police Department around 1:00 a.m. the next morning. The son was not admitted and was brought back to the police station. The son was released after officers extorted 3,000 yuan from the family. Ms. Li has been sent to the Handan City No. 1 Detention Center.

According to information received on July 26, 2012, Ms. Wang Xiaomei is being held in the Shijiazhuang Women's Forced Labor Camp, where guards shocked her with electrical batons and left burn marks on her lips and the area between her nose and upper lip. Her lips swelled badly and she was in great pain whenever she tried to speak.

Ms. Li Zhongfang from Chengdu City was arrested in Qingquan Town, Qingbaijiang District for talking to people about Falun Gong on the afternoon of August 1, 2012.

Mr. Tu Guixun from Yunyang County, Chongqing was tortured in the Zouma Prison and blinded in both eyes as a result. He was released on March 30, 2012 and still cannot see a thing at present. The authorities continue to go to his home and harass him.

Ms. Ye Lechuan from Wuhan City was arrested again by officers from the Huaqiao Police Station on July 10, 2012. She was sent to the Wuhan City No. 1 Detention Center for a term of 15 days. Officers from the Huaqiao Police Station came to interrogate her on the afternoon of July 23, 2012. Ms. Ye was taken away on July 24 and her whereabouts are unknown.

Ms. Ye is 55 years old and has been persecuted many times. She was arrested in 2001 and was held in custody for 15 days, then in a detention center for a month, and then in the Hewan Forced Labor Camp for a year. Her term was extended for another three months during that period. After her release, she was detained again three times, and held 15 days each time, for handing out informational materials about Falun Gong. On one of the three occasions, September 9, 2010, Ms. Ye was detained by officers from the Huaqiao Police Station.

Ms. Huang Weiwei from Sankeshu Town, Kaili City was detained at her rented house on the evening of July 12, 2012 by officers from the Nanning City Police Department and the Xixiangtang Police Department. Her whereabouts remains unknown.

Director Xu and four officers from the Heyang Police Station and four collaborators barged into Ms. Lan Tailian's home on the evening of July 25, 2012. They arrested Ms. Lan Tailian and confiscated several copies of Falun Gong books and several copies of informational brochures. When they were about leave, Ms. Lan's young brother, not a practitioner, arrived. The police then took Ms. Lan's brother back to his home and confiscated some informational VCDs there.

Ms. Lan's family went to visit her on the morning of July 31 and learned that she would be held for 20 days, then sent to a forced labor camp for one year.

Ms. Yu Shaoping, a teacher at the Beijie Primary School in Dayi County, Chengdu City, was arrested for explaining the facts about Falun Gong in 2008. She was held in the Xinjin County Brainwashing Center in Chengdu City for a long period. Now she's being held in the Dayi County Detention Center. It's been over three years since her detainment.

Ms. Yu's husband was also detained and is being held in the Xinhua Forced Labor Camp in Jinyang, Chengdu City.

Ms. Sui Guilan from Lishu District in Jixi City was arrested from a classroom at Taiyangsheng Primary School where she was teaching on the morning of July 4, 2012. They took her key, barged into her home and confiscated a computer devoted for her students usage and three cell phones.

Ms. Sui has been held in the Jixi Detention Center, and has been on a hunger strike to protest the persecution since the arrest.

Ms. Xu Xiuhua from Fuxin City was released from Masanjia Forced Labor Camp on the afternoon of August 1, 2012. Her family took her home that day. As a result of being tortured in the camp, the right side of her body is paralyzed. Her mouth is tilted to one side, and the left side of her body feels numb from her foot to her waist. She cannot pass urine and stools without aid.

“The Chinese Communist Party Lies about Fires (Again and Again)”

“The Environment Changes According to One's Cultivation State”