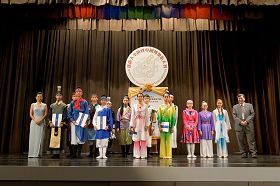 The Asia-Pacific Preliminaries of New Tang Dynasty (NTD) Television’s Fifth International Chinese Classical Dance Competition were held in Hong Kong for the first time. Despite interference from the Chinese Communist Party, it had a successful conclusion.(Song Xianglong/The Epoch Times)

On Saturday, The Epoch Times reported on the disturbances created by an organization in Hong Kong backed by the Communist Party’s United Front Department. A group of approximately 30 individuals, calling themselves the Youth Care Association, engaged in nuisance-making activities outside the venue, annoying guests and attempting to intimidate judges walking to the venue.

As of that time, the communist regime had already gone to great lengths to discourage dancers from participating in the competition.

Despite widespread interference, five contestants advanced to the junior division semi-finals, which will be held in New York at the end of October.

The organizers and judges were pleased with the successful conclusion and hopeful that more dancers will have the opportunity to demonstrate their appreciation for traditional Chinese culture in future competitions.

Ma Lijuan, chairperson of NTD’s Competition Series, said the regime’s attempt to sabotage the competition had backfired. “We successfully held the preliminaries in Hong Kong. The CCP must not have expected this,” she said.

Ma said the CCP’s efforts actually helped get more recognition for the dance competition. “The oppression only lets people in dance communities know [about] the competitions we hold in Hong Kong and around the world. It makes them pay more attention and have a better understanding,” she said.

Zhang Tiejun, a competition judge, ridiculed the CCP for interfering with Saturday’s competition. “I think the CCP’s interference is ridiculous, because passing on authentic traditional culture is what all Chinese people should do. Overseas Chinese hope to enrich their own culture. Why did the CCP do such a foolish thing?” said Zhang.

Although the competition concluded successfully, not all potential contestants were able to endure the pressure. Zhang felt sorry for those who didn’t participate. “They lost such a good opportunity, not because of themselves, but because of the CCP’s bad deeds. They will still have chances in the future.”

Vina Lee, spokesperson for the Classical Chinese Dance Competition, said the contestants had worked very hard, their skills were very advanced, and they performed well.

Su Yufang, one of the selected female contestants from Taiwan, had prepared for the competition for more than two months. She was upset to learn that the CCP prevented other contestants from joining. “Why didn’t they want more people to know about something so good and beautiful? I think it is unreasonable. I want to cry, it makes me quite sad,” she said.

As the competition ended, the audience expressed resentment over the CCP’s actions to frustrate the event. An audience member, Ms. Zhang, said her two friends’ daughters in Beijing planned to compete but could not make it. One mother had been arrested; the other mother and her daughter had their plane tickets and passports confiscated. The police also waited for them at their homes and threatened the girls, saying if they joined the competition, they would lose the opportunity to attend school.

“I am very moved because there are still 14 contestants attending the competition under pressure, and also because of the wonderful pure music and dance. I feel sorry for those who were arrested and could not attend,” Ms. Zhang said.

Luo Feng, an audience member and Canadian law intern, said he learned about the competition from watching NTD. He said he found the performance a positive experience, but thought the disturbance was unfortunate. “I feel sad. Why does a Chinese organization disrupt people from promoting their own culture?”