(Minghui.org) On August 6, at a political gathering held in Vancouver, Falun Gong practitioners met with the Canadian Prime Minister, Stephen Harper. Practitioners expressed appreciation to PM Harper for his past support for Falun Gong, and asked him to continue to pay attention to the forced organ harvesting of Falun Gong practitioners in China by the Chinese Communist Party (CCP). The Prime Minister expressed concern and continued support, and his secretary accepted a copy of Bloody Harvest, The killing of Falun Gong for their organs, written by independent Canadian investigators. 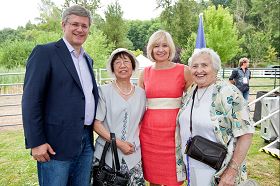 PM Harper responded that the Canadian government has brought up the persecution of Falun Gong several times with the Chinese government.

Zhang Su said to Prime Minister Harper that China is at a historic period, with major political changes taking place in China with the downfall of high ranking leaders Bo Xilai and Wang Lijun. She hopes that the Canadian government will take this opportunity to help stop the 13-year persecution of Falun Gong. When told about the organ harvesting from living Falun Gong practitioners in China, the Prime Minister, his wife, and his secretary expressed shock and concern.

PM Harper's secretary accepted a copy of Bloody Harvest, The killing of Falun Gong for their organs, written by two independent Canadian investigators, David Matas, a human rights lawyer, and David Kilgour, former Canadian Secretary of State. She said that she would read the report, and give it to the Prime Minister.

Simma Holt, former member of the Canadian House of Commons, has expressed her concern about the persecution of Falun Gong in China to Prime Minister Harper several times. She has asked PM Harper to take further action to help stop the persecution. 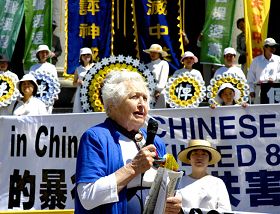 Former member of the Canadian House of Commons Simma Holt giving an address at a Falun Gong rally in 2006.

Ninety-year-old Simma Holt is a distinguished journalist, social crusader and a former Canadian representative. She has been impassioned about stopping the Chinese communist regime’s persecution of Falun Gong. Ms. Holt has referred to Falun Gong practitioners as “our true friends” and has praised practitioners for their courage and declared them to be the most peaceful group of people worldwide. “They have worked tirelessly for justice and freedom, and called for an end to the killing in China. If anyone had stepped forward to stop Hitler, fewer Jews would have died.”

According to Ms. Holt, the most important and discussed news in the world should be the torture and slaughter of Falun Gong practitioners in China, as well the organ harvesting of practitioners for economic profit. Ms. Holt has fully supported practitioners' sitting in protest in front of the Chinese Consulate around the clock over the past years. "This is a symbol of Canada's value of freedom," said Ms. Holt. She added, "They are leading the world towards a future without genocide. If there were a group like Falun Gong in 1936, the genocide [of the Jewish people] would not have happened."