Then who is this legendary figure? He is Mr. Li Hongzhi, founder of Falun Gong.

Medicine and Health published an article entitled “To Cure Illness and Keep Fit, Falun Gong is the Best” on December 24, 1997.

China Economy Times published an article entitled, "I Can Stand Up!" on July 19, 1998. This article reported the story of Xie Xiufen, a housewife from Handan City, Hebei Province, who had been paralyzed for over 16 years, but was able to walk after she started practicing Falun Gong.

China Yangcheng Evening published an article entitled, "Both the Elderly and the Young Practice Falun Gong," on November 10, 1998, that reported on about 5,000 practitioners participating in the large-scale morning exercises. The article also told a story about Ms. Lin Chanying, a statistician at Guangzhou Leather Diwei Co. Ltd., who had been paralyzed and lost control of 70% of her body, but was able to walk again after she started practicing Falun Gong. 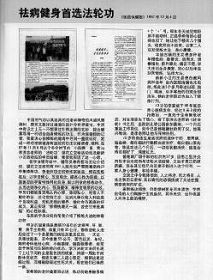 Medicine and Heath Newspaper, December 4, 1997, the article entitled, “To Cure Illness and Keep Fit, Falun Gong is the Best” 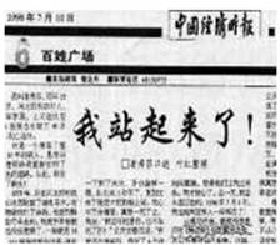 China Yangcheng Evening published an article titled, "Both the Elderly and the Young Practice Falun Gong," on November 10, 1998

Since the Chinese Communist Party (CCP) started the persecution in 1999, the media coverage in China about Falun Gong's tremendous effects on healing and fitness has disappeared, but taking a look at the international media, such reports can often been seen over the past 13 years.

The Financial Express (New Delhi) published an article entitled, “In Harmony with Nature” on November 12, 2000. It stated, “Based on the principles of truthfulness and benevolence, Falun Gong claims to cleanse the system through meditation and exercise.” This report was published more than one year after the persecution started.

The report told a story of the positive physical changes experienced by Ms. Suneeta Khullar, and Ms. Anna Chan. Ms. Khullar, a resident of South Delhi and a Reiki Master and a trained magnetic healer, finds Falun Gong exceptionally powerful. "It's very simple and easy. Moreover, I have felt a tremendous flow of energy in myself since I took to it," she says. "Falun Gong is about cleansing the body and creating harmony which would indirectly improve one's health," explains Ms. Anna Chan, a volunteer from the U.S.

In addition, Irish National TV Station RTE broadcasted a special program on Falun Gong–Irish Citizens Practice Falun Gong—on November 13, 2002. The program emphasized the stories of Ms. Maria McMullen and 23-year-old Jared O'Conner, a then graduate student in computer science. The program talked about the changes Falun Gong brought to Maria after one year of practice and Jared's understanding of Falun Dafa after practicing for two years.

Still more coverage in the media outside of China has enabled the world's people to learn about Falun Gong's effects on healing and fitness.

Switzerland's Migros Magazine 45 published a story of a Swiss lady, Ms. Marille Pun, on November 2, 2004. Ms. Pun was very ill in her childhood. In 1985, having qualified as a lawyer, she immediately became a legal officer. But a 70-hour working week over five years finally became too heavy a burden for her.

Ms. Pun became ill again in 1999. She suffered from backaches around the clock. "Fibromyalgia syndrome" the doctors say. Above all, what captivates her, she said, "is the philosophy of Falun Gong: an inner work, personal, at his or her own pace, to cultivate freely within, in daily life, these principles of truth, benevolence and forbearance. This practice brings you harmony and inner strength and allows the energy to circulate in a marvelous way throughout the body." It uplifts, calms, relieves stress and tiredness, opens up the meridians, said Ms. Pan. 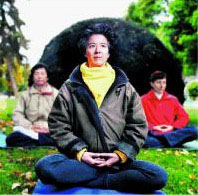 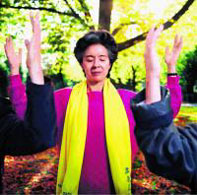 Spain's State Radio Station interviewed a Falun Gong practitioner on its prime-time show on January 10, 2005. Practitioner Carlos Iglesias said, “Two years ago, I attended the National Health Expo in Madrid. At one stand somebody introduced Falun Gong to me: exercises, meditation. Great! It looked like Tai Chi or yoga. I had some problems with my spine. Thus I started practicing Falun Gong. It was absolutely free. After practicing fifteen or twenty days, my back problems and problems in other places disappeared completely.”

After years of suffering from back pain and sore hips, knees and ankles, Tibor Horvath said that he found the cure. Five simple exercises called Falun Dafa (also called Falun Gong) completely relieved him of his pains, he claims. Tibor Horvath's pleasant experience was published in Hungarian newspaper The Budapest Sun – Health & Leisure Focus, a special edition on May 24-30, 2007.

A professor of mathematics at the University of Mumbai in India said that Falun Gong cured the spondylitis that had plagued her for 20 years. Rajeev Kumar, an officer working at the Delhi Metro, once suffered from high blood pressure. One month after he began practicing Falun Gong in 2002, he found that his physical health had improved. He stopped taking medicine soon after. His experience was recorded in the article “Using Chinese Therapy to Circulate Energy in One's Body,” published in India Times on December 30, 2008.

Sixty-two-year-old Ms. Bao Xuezhen, a Falun Gong practitioner living in Copenhagen, Denmark, started practicing Falun Gong in 1995. Her stubborn illness that had plagued her for years miraculously disappeared in a short time. The physical and mental benefits have kept her practicing Falun Gong. Denmark's newspaper Politiken interviewed her and published her story on June 15, 2012. 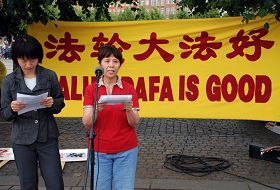 Why does Falun Gong have such tremendous effects on people's health? Some media reported in-depth on its scientific principles.

As early as September 1997, The Chicago Times published a series of articles, "Humans and Science: The Enlightenment of Falun Gong." The articles said that Falun Dafa inspired mankind to explore new science. It discussed the relationship between Falun Gong and health. On August 25, 2005, in its Health Edition, the Italian weekly magazine Espresso published an article entitled, "Falun Gong Benefits Health." In the article, the author quoted a paper published in the Journal of Medicine: "Those who practice qigong feel very healthy, and such a feeling can be confirmed by scientific research. Qigong is a kind of mild practice that aims at mobilizing energy, and it is one of the foundations of Chinese medicine."

The article discussed the research of scholars at the University of Texas, who examined the effects of qigong by using a modern technology which allows simultaneous analysis of thousands of genes. Those scholars studied one group of leukocyte (blood cells that engulf and digest bacteria and fungi; an important part of the body's defense system) of people of Asian descent who have practiced Falun Gong for at least one year, comparing them with a group of people who had never practiced Falun Gong. They found that the leukocytes of those who practiced Falun Gong were more vigorous, creating stronger immunity. Consequently, those people could recover from infection much faster than the control group.

In 1998, the National Sports Commission in China organized medical researchers in Beijing, Wuhan, Dalian, and Guangdong Province to conduct five surveys of over 35,000 Falun Gong practitioners. The survey results indicated that the overall effectiveness of Falun Gong practice in healing illnesses in those areas exceeded 98%. The full and basic recovery rate exceeded 70%. The mental and spiritual conditions of those surveyed were also greatly improved. The survey results of Falun Gong's healing effects in North America in 1999 and in Taiwan in 2002 were the same as those in China in 1998.

(1) The effectiveness of Falun Gong practice is demonstrated by the 70% complete and basic recovery rate among Falun Gong practitioners who previously suffered from illnesses, with the overall effective rate reaching over 98.0%.

(3) Falun Gong practice has been shown to exert a positive impact on behavior and lifestyle.

(4) Most Falun Gong practitioners experienced rapid health improvement after they started cultivation. The speed and effectiveness are commonly described as "amazing."

We can see that the international media coverage on Falun Gong's tremendous effects on improving people's health is not accidental.