Sweden: Falun Gong Practitioners and Supporters Call for an End to the Persecution (Photos)

(Minghui.org) On the 13th anniversary of Falun Gong’s resistance to the persecution, practitioners in Sweden rallied outside the Chinese Embassy in Stockholm on July 20, 2012. They also held activities in a town center, Mynttorget, located between the Swedish Royal Palace and the Swedish Parliament, over the weekend of July 21-22. They informed the public of the facts about Falun Gong and condemned the persecution by the Chinese Communist Party’s (CCP) regime. Many people came to sign the petition to support Falun Gong. 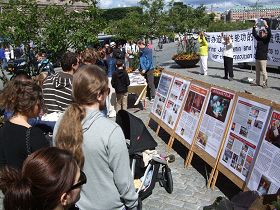 Talking with people about the persecution

Signing the petition in support of Falun Gong

Compelled to Speak Out

Many Swedish practitioners particitpated in the “July 20” activities in Stockholm. Many of them travelled there from other towns. Kristina, a dance teacher, with her husband and their three daughters, drove over five hours to take part in the protest outside the Chinese Embassy.

Kristina said, "I think it is worth the time and effort to come here. The CCP regime is still persecuting good people while at the same time the regime is lying to the whole world. We have the responsibility to inform people about the real situation. This persecution is totally unjustified and must be stopped."

A Young Chinese Has a Change of Heart

A young Chinese man stood in front of the posters. He was wearing a pair of black sunglasses and seemed unimpressed. A practitioner went to talk with him. The man mentioned that he was a PhD student in Finland. He knew about the persecution. He came from northeast China. One of his neighbors had been arrested by the police for practicing Falun Gong. He thought that as he had nothing to do with Falun Gong, he had no interest in knowing more. But when he saw that among those demonstrating the Falun Gong exercises at the event was Mr. Vasilios Zouponidis, who last year received the Swedish “King Carl XVI Gustaf's Honorary Prize” as an entrepreneur, he became interested, took off his sunglasses and started reading the posters seriously. He collected all the brochures and newspapers in Chinese before leaving and said, “Thanks! Thanks! I will study them carefully.”

Vasilios Zouponidis has participated in each year’s protest in Stockholm, calling for an end to the persecution of Falun Gong. He has also taken part in many such rallies in other countries around the world. For this year’s “July 20,” he, with his wife and two children, drove two and a half hours from their hometown to Stockholm and joined the protest outside the Chinese Embassy. When he was asked why he participated in the demonstration, he answered, “We should first of all be human beings. A person with conscience would react when good people are being harmed. This is the most important thing.” Vasilios and his family also participated in the activities at Mynttorget the following two days.

Vasilios started practicing Falun Gong in 1998. He thinks that much of his success is due to his practicing Falun Gong and that “good is rewarded with good.” He said, “Because I am a practitioner and always try to act in accordance with the principles of ‘Truthfulness-Benevolence-Forbearance,’ my company has been successful although the economy has been in recession in Europe. All of my success is thanks to Master Li and Dafa, absolutely!”