(Minghui.org) On July 21, at the 13th anniversary of the peaceful resistance to the persecution in China, Falun Gong practitioners from Philadelphia held a rally at the Liberty Bell Plaza, exposing the brutal persecution to the public and calling for it to end. A report covering the event, “Fighting for Religious Freedom,” appeared on July 26 in the Public Record, a local newspaper. 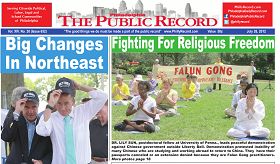 The report in the Public Record

The photo captions in the report include: “Falun Gong—which means “Dharma Wheel Practice—is a spiritual discipline first introduced in China in 1992 through public lectures by its founder, Li Hongzhi. It combines practice of meditation and slow-moving qigong exercises with a moral philosophy. Chinese government has banned practice.”

“Demonstration protested inability of many Chinese who are studying and working abroad to return to China. They have their passports canceled or an extension denied because they are Falun Gong practitioners.”

“Chinese officials at various consulates around world refuse to give reason or legal basis for their actions.”