Washington, DC: Falun Gong Entry a Stand Out in the 4th of July Parade (Photos)

This July 4th marked the 236th anniversary of the United States of America. The parade was held on Constitution Avenue. Hundreds of thousands of people watched the parade that began at noon. 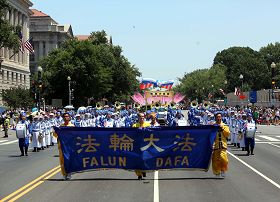 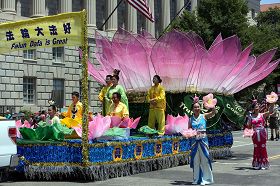 Cesar from Spain saw Falun Gong in the parade for the first time. He commented, “Splendid. Beautiful. It (Falun Gong) was the best group in the parade.”

A professor from a university in Baltimore, Maryland, told his wife about the persecution of Falun Gong in China when the Falun Gong procession passed by. He does research on religious belief and said that it was incredible that this practice that follows Truth-Compassion-Forbearance was being persecuted in China.

Richard, a software engineer from Texas, brought his whole family to see Washington, DC, and got to see the parade. He said, “The Falun Gong procession is really great. I am very interested in Eastern culture. I've seen white and black groups in previous parades. Falun Gong adds Chinese culture to the parade. That's important.”

Peter Dean, who works in the US government, said that Falun Gong represented both American and Asian cultures. “It is helpful to fill in the gap and increase mutual understanding, especially on this commemorative holiday. The participation of Falun Gong is a wonderful example of what this holiday is all about.”

Among the spectators were many Chinese. Ms. Li from San Francisco came to work in DC for the summer. She said it was her first time to see a Falun Gong procession. She said, “The costumes are traditional and special, different from other groups. I was surprised.” She said something like this could only be seen in the United States, a country that respects freedom.

Mr. Zhou from Ohio came to work in Washington, DC. He watched the Falun Gong procession in the parade for the first time. He said, “They are peaceful and totally different from how the Chinese Communist Party’s propaganda describes them.”

Mr. Liang joined the band at the end of 2005 and was one of the earliest members. It was the seventh time he had participated in the DC Independence Day Parade. He said, “Though it is hot, the spectators are very enthusiastic and applaud. We are pleased to participate in the parade and represent Falun Gong.”

As a member of the band, Mr. Liang has participated in parades in Boston, Chicago, Los Angeles, San Francisco, and Philadelphia. He said that the members of the band are composed of Falun Gong practitioners of different races, ages, and professions, including doctors, employees of large corporations, students, and retirees. They practice on weekends.

Ms. Yijie Zhang is from Beijing and was Director of the General Office of China's Ministry of Foreign Trade and Economic Cooperation. To pressure her to renounce her belief, the police tortured her in dozens of different ways, including forcing her to stand for 42 days and depriving her of sleep.

When she was in Beijing a few years ago, Ms. Zhang saw the band perform on the Minghui website. She and a few others were moved to tears. She thought, “If I could go to America. I must join the band.”

After she came to America, she practiced the saxophone very hard for three months and joined the band after taking an entrance exam. She treasures the opportunity to participate in the parade as a member of the band. She said, “However hot or difficult it is, I will perform my best so that the spectators will know that Falun Dafa is great.”