(Minghui.org) The opening ceremony of the 28th Taiwanese and Chinese American Athletic Tournament in the San Francisco Bay Area took place at Foothill College Stadium on the morning of July 22, 2012. The US West Divine Land Marching Band was invited to perform in the opening ceremony.

The band performed “Falun Holy King,” “Falun Dafa Is Good,” and “America the Beautiful.” Their spirited performance won enthusiastic applause from the audience.

Janice Sung, chairperson of this year's tournament, commended the band, saying, “Very energetic performance. They display an athletic spirit. They come every year to support. I feel they are welcomed and I'm very happy.” 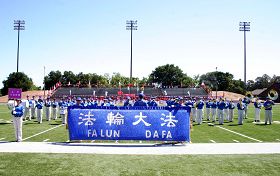 Jack Chiang, director-general of the Taipei Economic and Cultural Office in San Francisco, said, “The deepest impression Falun Dafa gives us each time is that they are highly disciplined. Their uniforms are rather bright, fully demonstrating that they are a distinguished group.”

Since 1984, the San Francisco Bay Area Chinese have held the Games annually. Chinese Americans display their talents and Chinese culture through athletic performances. A total of 101 teams participated in this year's Games. The US West Divine Land Marching Band was invited for the first time in 2006 to take part in the Games' opening ceremony, and left a favorable impression on the organizers and guests. Since the following year, the Games' organizers have invited the band as special guests to perform at the opening ceremony.