Paris, France: Practitioners Hold a Rally in Front of the Chinese Embassy to Peacefully Protest the 13-Year Brutal Persecution (Photos)

(Minghui.org) Falun Gong practitioners in France held a rally in front of the Chinese Embassy in Paris on July 20, 2012 to peacefully protest the 13-year brutal persecution of Falun Gong by the Chinese Communist Party (CCP) and to mourn practitioners who were killed in the persecution. The activity gained support from people from all walks of life and organizations in France. Jacques Lang, former French Minister of Education and Minister of Culture, wrote a letter to express his support. Reporters Without Borders, the French Association “Together Against the Death Penalty,” and French pro-democracy activists came in person to condemn the CCP's atrocities. Falun Gong practitioners also recounted their personal experiences of being physically tortured and persecuted when they were in China. 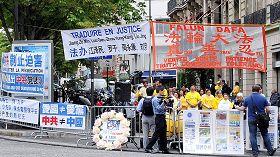 Falun Gong practitioners hold a rally in front of the Chinese Embassy in Paris, France on July 20 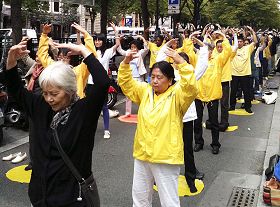 Practitioners demonstrate the Falun Gong exercises at the rally venue 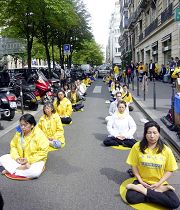 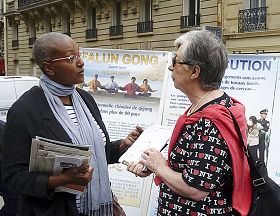 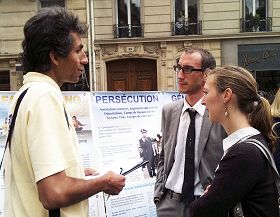 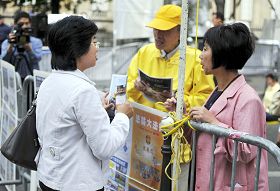 Exposing the Brutality of the Persecution 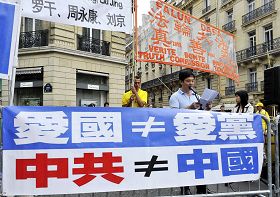 Mr. Tang Hanlong, Chairman of the Falun Dafa Association of France, speaks at the rally

Mr. Tang Hanlong, Chairman of the Falun Dafa Association of France, spoke at the rally. He said that since the CCP seized power in China in 1949, the regime has caused the deaths of more than 80 million Chinese people through its various political campaigns, the total number exceeding that of the two world wars. Even at present, the CCP regime hasn't stopped persecuting people in China. The persecuted groups include Tibetans and people of other nationalities, Christians, Chinese journalists and human rights lawyers. In particular, since July 20, 1999, as many as 100 million Falun Gong practitioners have been subjected to various kinds of persecution. The number of documented deaths of practitioners as a result of the persecution has reached 3,583 as of July 2012. 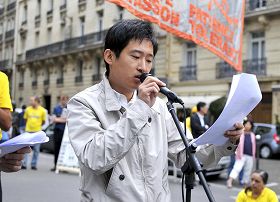 Mr. Wang Zhe from Tianjin was sentenced to forced labor for distributing VCDs exposing the hoax of the Tiananmen Self-immolation. He was severely tortured. The guards ruthlessly beat him and shocked him on the palms of his hands, soles of his feet, top of his head, and on the neck and mouth with six electric batons. His back was covered with welts filled with pus as a result of the electric shocks, the pustules eventually eating away a section of his rib and vertebrae, which led to his paraplegia. He had to have bone graft surgery. He also witnessed a Falun Gong practitioner being beaten to death by the guards in the forced labor camp. Since he fled overseas, Mr. Wang has told his experience to many people, to testify that the CCP's persecution of Falun Gong practitioners truly exists. 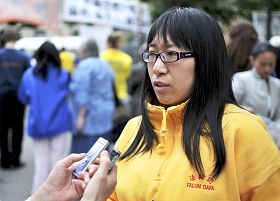 Ms. Liu Shuqi tells of the persecution her family has suffered

Ms. Liu Shuqi is from Tangshan City, Hebei Province, China. She recounted how her family was persecuted: “My mother Bai Yanhui went to Beijing to appeal for justice for Falun Gong and was illegally detained. She was physically and verbally abused and tortured in a forced labor camp. The guards once handcuffed her hands to a metal bed for 20 days. The police also installed a video surveillance camera at the gate of my home to monitor us. They often came to search and ransack my home. When it was one of the regime's “sensitive dates,” they came to harass us. My whole family has been living under the Red Terror for 13 years.”

Jacques Lang, former French Minister of Education and Minister of Culture, sent a letter to the rally to express his support. He said that his heart was with Falun Gong practitioners. 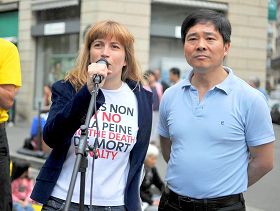 Arianne Gresillon, Vice-chair of the French Association “Together Against the Death Penalty” speaks at the rally 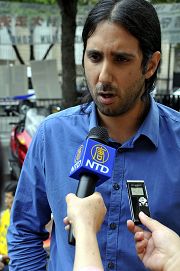 Benjamin Ismaïl, spokesperson for the Asia-Pacific Division of Reporters Without Borders

Benjamin Ismaïl, spokesperson for the Asia-Pacific Division of Reporters Without Borders (RWB), said that RWB is very concerned about the freedom of speech and freedom of press in China. He said that in order not to let this country hide behind its economic weight and position in the international arena, it is necessary to continue exposing all the human rights violations committed by the Chinese authorities. “We have kept in touch with France and the U.S. governments. We will have to do so all the time,” said Mr. Ismaïl. 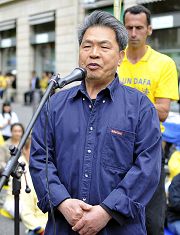 Wu Jiang, Chairman of China Democratic Party in France, spoke at the rally

Chairman Wu Jiang and Vice-chair Jiang Shoulu of the China Democratic Party in France spoke at the rally. Mr. Wu said that the persecution of Falun Gong by Jiang Zemin and other evildoers has brought China into an unprecedented state of impending disaster. “We strongly demand that Jiang and others evildoers be brought to justice. The CCP's one-party dictatorship has led China to a path of moral degeneration and terrorism,” said Mr. Wu. 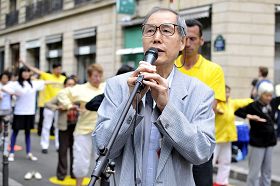 Mr. Jiang said that recently 300 villagers in Zhouguantun Village, Botou City, Hebei Province signed and put their thumbprints on a petition to demand the release of Falun Gong practitioner Wang Xiaodong, who was illegally detained by the local Political and Legal Committee. This strong support from ordinary citizens shows that the CCP's persecution has been a complete failure. The CCP is heading towards its downfall with the progress of the grand tide of people quitting the CCP organizations, following the publication of the Nine Commentaries on the Communist Party.

Practitioners demonstrated the exercises at the rally venue. Their peaceful exercises formed a stark contrast to the display exposing the CCP's brutal persecution of Falun Gong practitioners. Many people passing by wanted to learn more about Falun Gong and listened carefully as practitioners shared with them.

“Greece: Practitioners Raise Awareness of the Persecution and Help People Learn the Facts”

“A Remote, Mountainous Region in Northern India Has a Welcoming Heart for Falun Dafa (Photos)”