Taiwan: Falun Gong Practitioners Hold a Press Conference and Candlelight Vigil in Chungli to Call for an End to the Persecution of Falun Gong (Photos)

(Minghui.org) The Chinese Communist regime has banned and persecuted Falun Gong practitioners since July 20, 1999. Practitioners around the world have been protesting the persecution peacefully and rationally for the past 13 years. 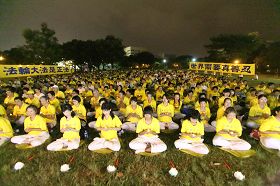 Seeking to "Preserve Kindness by Ending the Persecution [of Falun Gong],” Taiwanese practitioners from Taoyuan, Hsinchu, and Miaoli held a candlelight vigil and a press conference on Saturday, July 21, 2012, to raise public awareness of the persecution of Falun Gong. 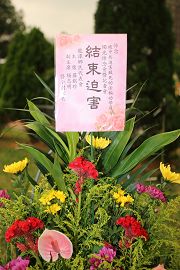 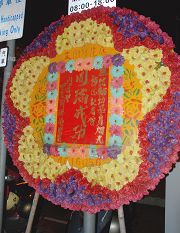 Ms. Liu Tsai-Ying, Head of Neicuoli Neighborhood in Chungli, Taoyuan, sent a wreath to support the cause

Ms. Ou, the main organizer, said that they will keep stepping up efforts for as long as the Chinese Communist regime continues to ban Falun Gong, and that they will raise public awareness by various means and call for the public's condemnation to end the persecution.

Ms. Ou said, "The freedom of personal belief is a basic human right. Those who follow the principles of Truthfulness-Compassion-Forbearance should be praised and not locked up."

The event started at 4 p.m. and included a march and demonstration of the Falun Gong exercises. The march passed by the most popular area. Along the march route, practitioners distributed free materials containing important facts about Falun Gong and the persecution. 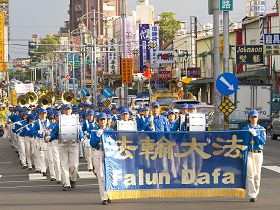 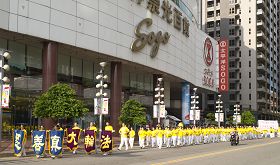 A demonstration of the Falun Gong exercises 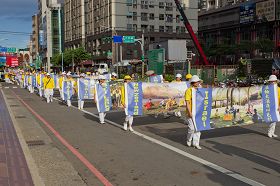 Posters showing Falun Gong practitioners from many countries around the world 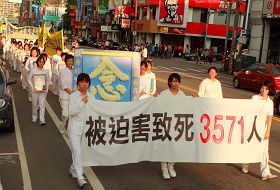 According to Minghui.org's incomplete statistics, at least 3,571 people have been confirmed dead as a result of China's persecution of Falun Gong 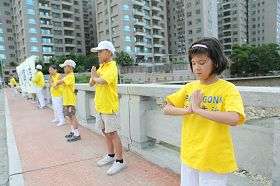 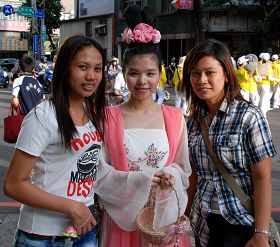 Mr. Liao heard about Falun Gong and knew that China arrests and persecutes practitioners. He immediately signed the petition when he heard about the effort to rescue Mr. Chung Ting-Pang, a Taiwanese practitioner illegally detained in China. Mr. Liao said, "I have heard of Falun Gong and have a lot of admiration for it. They are the only ones who have the courage to speak the truth and reveal the lies of the Communist Party."

Mr. Liao added that people should enjoy freedom of belief, and that it is wrong to arrest those who believe in Falun Gong. He said that no other political regime in the world persecutes its people to such an extent.

Along the route, practitioners handed out free materials containing important facts about Falun Gong and the persecution. Some practitioners solicited signatures for the petition to rescue Mr. Chung Ting-Pang, who is currently detained in China. Many people signed the petition after learning his story.

Mr. Lin said he might not understand Falun Gong, but he has read the Nine Commentaries on the Communist Party. When he saw a large model of the book, he said, "I am very impressed with the book. Communism came from Europe and is not part of the Chinese culture."

The Candlelight Vigil to Mourn the Deceased Falun Gong Practitioners

It was nearly dusk when the march returned to Guang Ming Park. Outside of the park, practitioners collected signatures on a petition to rescue Mr. Chung Ting-Pang. At another table practitioners displayed free materials to raise public awareness. A policeman in plainclothes told practitioners he has been repeatedly assigned to monitor Falun Gong's public events. He felt at ease when he saw the practitioners in yellow shirts. He added that he now comes to Falun Gong's events to protect practitioners from harassment. He also expressed an interest in joining the Divine Land Marching Band.

As it turned dark, candles were lit up in the park, creating a sense of solemnity. The vigil started at 7 p.m. and included poems, a speech by human rights attorney Ms. Chu Wanchi, a film, guest speeches, musical performances, and a chorus.

Ms. Chu Wan-Chi said that Falun Gong practitioners around the world have been protesting China's persecution for 13 years. Falun Gong has not yielded to the cruel persecution, and people around the world have witnessed the peace, kindness, and courage manifested by its practitioners. It is only made possible by the teaching of the founder of Falun Gong, Mr. Li Hongzhi, and the principles of Truthfulness-Compassion-Forbearance.

Ms. Chu stated, "China's ban on Falun Gong is completely illegal. The practice has never been outlawed in China. China's constitution guarantees all Chinese citizens, including those who practice Falun Gong, the freedom and right to practice. There is no law in China that says it is a cult and must be suppressed. China's decision to suppress it on July 20, 1999, was made by Jiang Zemin (the former chairman of the Chinese Communist Party). The ban is in violation of China's laws and the international human rights convention it has signed. It is also in complete violation of China's constitution."

Many tourists and students from China have agreed to quit the CCP and/or its two affiliated student organizations in recent years. The trend apparently has caused a stir in the CCP. Mr. Chung Ting-Pang, a Taiwanese Falun Gong practitioner, was arrested and illegally detained in June 2012 during a private trip to China.

Ms. Chu called upon the world to act on their conscience to rescue Falun Gong practitioners and end the persecution.

Former chief adviser at the Legislative Yuan: “I am confident that China's tyranny shall collapse.”

Mr. Chiu Chuei-Chen, former chief adviser at the Legislative Yuan, said that he has been practicing Falun Gong for five years. More than ten illnesses, including heart disease, pancreatic disease, gastric ulcer, and other diseases, have shown signs of improvement. He said he is becoming increasingly healthy. Mr. Chiu said, "Falun Gong is truly magical, and the principles are ingrained in my mind and have significantly improved my temper. Truthfulness-Compassion-Forbearance is wonderful." 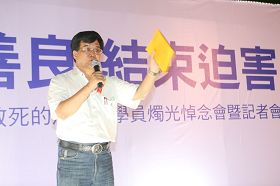 Mr. Chiu Chuei-Chen, former chief adviser at the Legislative Yuan, called upon the Taiwanese government to speak for Falun Gong

Mr. Chiu added that the Chinese Communist regime cannot be reasoned with. Not long ago a group of youth from Guangdong Province visited Taiwan and said the most beautiful thing about Taiwan is its people, because Taiwanese people have a beautiful heart. In contrast, the Chinese Communist regime that is known for its falsehoods, depravity, and strife, cannot even tolerate Falun Gong that is based on the principles of Truthfulness-Compassion-Forbearance.

Mr. Chiu said that Falun Gong is a cultivation school that will enhance one's morality and help one attain peace. He does not understand why China has banned it and finds it incredulous. He said that more and more people are learning the truth and he is convinced that we shall soon see the collapse of the CCP.

In her speech, Taoyuan County Parliament member Ms. Li Yue-Chin said that she often sees Falun Gong practitioners doing the exercises at school or in public parks. All of the practitioners she has met are kind, compassionate, and sincere. One can see practitioners all over Pingchen City conducting themselves in accordance with the principles of Truthfulness-Compassion- Forbearance. She finds it to be very positive and worth her recommendation. 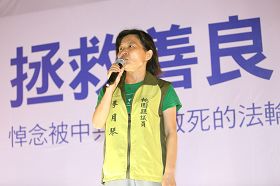 When she heard that Mr. Chung Ting-Pang was in custody in China, she called upon the Taiwanese government to rescue him. She said that Taiwan is a democratic country, but China is notorious for bullying and persecuting its people.

Taoyuan County Parliament member Mr. Hsu Ching-Wen said that it is an injustice for China to suppress Falun Gong, and it is cowardly for the Taiwanese government not to rescue its people. Taiwan's Strait Exchange Foundation (SEF) and China's Association for Relations across the Taiwan Straits (ARATS) have done nothing to show their concern for Chung Ting-Pang. Mr. Hsu said, "When Chung Ting-Pang traveled overseas, he represented a citizen of Taiwan, but the Taiwanese government does not care and does not do anything to rescue him. His daughter had to go to the United States and meet with US congressmen. She had to speak up through overseas media to call for the rescue of her father. It is an embarrassment for the Taiwanese government." 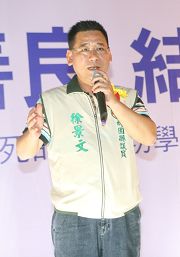 Taoyuan County Parliament Member Mr. Hsu hopes that Falun Gong practitioners around the world will have a safe environment

Mr. Hsu added, "There are many signs that show the Chinese Communist regime will soon collapse. I look forward to that day. I hope that Falun Gong will prosper not only in Taiwan, but also in the entire world. I hope practitioners will have a safe environment around the world."

Taoyuan County Parliament Member: By Supporting Falun Gong We Are Protecting Ourselves 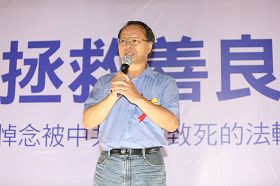 Taoyuan County Parliament Member Mr. Liang Hsin-Wu said that by supporting Falun Gong he is protecting his own human rights

Taoyuan County Parliament member Mr. Liang Hsin-Wu said he was saddened [by China's persecution of Falun Gong] because human rights are supposed to be universal values, freedom of belief and assembly. “Supporting Falun Gong today will protect our human rights tomorrow.” Mr. Chung is an expert in the high-tech world and a good citizen of Taiwan. He called upon Taiwan's Strait Exchange Foundation (SEF), China's Association for Relations across the Taiwan Straits (ARATS) and Ma Ying-Jeou administration to step forward and help rescue Mr. Chung Ting-Pang. He wishes that the whole world would follow Truthfulness-Compassion-Forbearance and that human rights and love would take hold around the world.

“US Congressman Paul Tonko: Truthfulness, Compassion and Tolerance Are Values We Share across Cultures and Faiths”