Falun Gong practitioners in Spain protest the CCP's brutal persecution in front of the Chinese Embassy. 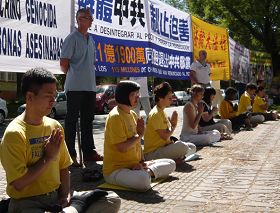 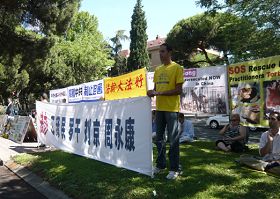 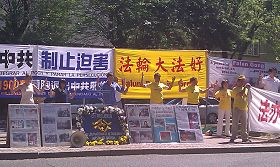 Practitioners displayed banners saying, “Falun Dafa Is Great,” “Disintegrate the CCP, Stop the Persecution,” and “Bring Jiang Luo, Liu, and Zhou to Justice.” Display boards depicting the brutal tortures and a wreath were set up in front of the banners. It was an impressive demonstration.

In his speech, Attorney Mr. Carlos Iglesias warned the Chinese officials who had been involved in the persecution of Falun Gong to stop immediately and that justice would not tolerate such heinous crimes. He warned the employees of the Chinese Embassy not to follow the evil CCP to persecute the innocent. He also mentioned the crisis the CCP was facing and the movement to quit the CCP and its affiliated organizations.

Falun Gong practitioner Ms. Zhao personally experienced the persecution when she was in China. She exposed the chaos the CCP has brought to the society and called for all fellow Chinese to make a choice based on their conscience.

An exercise demonstration was held after the presentations. The beautiful exercises and touching remarks drew the attention of many. They were shocked to learn of the brutality of the persecution and showed great interest in finding out more information. Some told practitioners that their activities were important in the fight for human rights in China.

Passersby were given introductory brochures and showed great support. They said, “The CCP regime is a horrible dictatorship!” “What's happening in China is shocking! It's so brutal!” Two young ladies said they had seen Falun Gong practitioners' protest activities before and knew about the persecution. They signed their names to show their support of Falun Gong. A lady who lived near the Embassy said she had seen Falun Gong's protest in the past years but hadn't gotten an opportunity to sign. Today she finally had a chance to show her support. A policeman approached the practitioners and politely asked for introductory materials to find out more.

After the peaceful protest, the practitioners said in unison from the bottom of their hearts, “Falun Dafa is great!”