(Minghui.org) The 6th Legian Beach Festival was held from July 5 to 8, 2012, in North Kuta, Bali. The theme of this year's festival was “Explore Indonesia,” which was an effort to promote the arts, handicrafts, and tourism in Indonesia.

Local Falun Dafa practitioners were invited to participate in the opening ceremony and parade on July 5th. 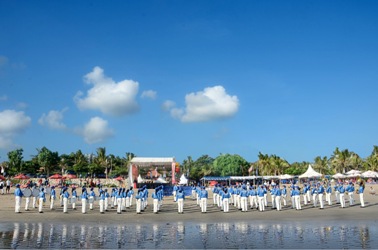 At around 6 p.m. the Divine Land Marching Band performed in front of the main stage. Many spectators attentively watched them play and applauded with enthusiasm. Then the band started to march along the shore to the west, while the practitioners’ waist drum team marched from west to east. Many locals, overseas observers, and Chinese tourists took photos 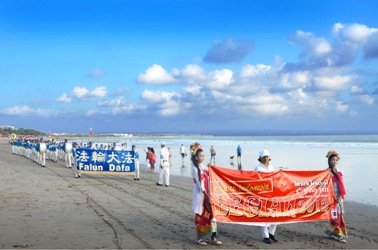 The band participates in the Legian Beach Festival parade

During the parade, practitioners distributed Falun Gong flyers in several languages to the spectators and tourists. Their performance and sincere smiles seemed to impress many spectators as evidenced by the warm feedback and applause. The event ended at around 6 p.m.