(Minghui.org) On July 20, 2012, the 13th anniversary of Falun Gong’s protesting the persecution, Falun Gong practitioners had a rally in front of New York City Hall to condemn the Chinese Communist Party (CCP)’s atrocities. They also called for more people to learn the truth about Falun Gong and help stop the persecution. 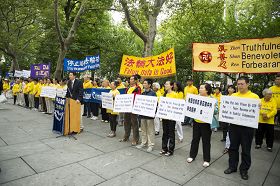 New York City Hall is located in lower Manhattan, where there was heavy traffic with endless cars and crowds of passersby. Many people paused to listen to the speeches at the rally and take photos and Falun Gong information flyers. A police officer said that the authorities weren’t worried about the gathering, because Falun Gong is a peaceful group. But this group that follows Truth-Compassion-Forbearance has been persecuted for 13 years in China. Many practitioners have been imprisoned in forced labor camps, prisons, and mental hospitals. Countless practitioners have been abducted and taken to brainwashing centers or beaten. Based on incomplete statistics, the documented deaths of Falun Gong practitioners as a result of the persecution is 3574. The most horrible violence is the CCP’s harvesting of organs from living practitioners for lucrative profits.

Ms. Wang came to the United States two months ago after overcoming many difficulties. She said, “On June 1, 2000, a few other practitioners and I were detained in an iron cage for unfurling a Falun Gong banner on Tiananmen Square. For protesting the unfair treatment I was beaten until my face bled. I was handcuffed behind my back with one arm over my shoulder (see photo) for not revealing my name. The handcuffs cut into my flesh. The police later hit my lower back and buttocks with a wooden baton. Two batons were broken during the beating. I was imprisoned for one year and three months.”

Ms. Zhizhen Dai said, “My whole family benefited from practicing Falun Gong. My father-in-law recovered from kidney failure after practicing. Later he went to appeal for Falun Gong and was arrested. He died as a result of being persecuted. My husband was tortured to death.” Her daughter was a little over one year old by then. Now she is taller than her mother, but the persecution is ongoing.

Dr. Fang of Doctors against Forced Organ Harvesting said that more and more evidence indicates the existence of the CCP’s practice of forced organ harvesting and that many Falun Gong practitioners have been killed for their organs. In May 1998, the CCP passed a policy to allow the harvesting of organs from death-row inmates. According to a CCP official, since 1999, the number of organ transplants increased suddenly to tens of thousands. But the number of death-row inmates since 1999 has not changed much. The was, however, a sudden increase in the number of people in forced labor camps after the large scale persecution of Falun Gong started on July 20, 1999.

A great deal of evidence suggests that more than 41,000 organs were not from death-row inmates, but from Falun Gong practitioners. The waiting time for an organ in China is very short. But doctors know that waiting for an organ is usually a long process, from several months to years. A patient of an Israeli doctor said he could not wait in Israel for a heart and went to China, where he got a transplanted heart within a few weeks.

Ms. Rong Yi of the Global Center for Quitting the CCP said, “A few years ago, the Epoch Times published the Nine Commentaries on the Communist Party, which explained how the CCP has ruined Chinese traditional culture and morality. Since 2005, the Global Center for Quitting the CCP has helped Chinese people to quit CCP and its affiliated organizations. As of now, more than 120 million Chinese people have quit the CCP and its affiliated organizations. Now it is time for the international community to stand with Chinese people to support their efforts in renouncing the CCP.”

The Chinese people are awakening

Ms. Wang, a tourist from China, paused to watch the rally with her friends. She said, “In China, many people don’t dare to mention Falun Gong. People are afraid, because that is what it is like there. But many people know the truth in their hearts. We have gotten Falun Gong informational materials. From the ground floor to the seventh floor, there have been Falun Gong flyers in front of each door. I like the flyers with the picture of someone sitting in meditation.”

Ms. Wang continued, “Now people are daring to speak out. People from all walks of life, especially common workers, criticize the CCP. It is true. I think quitting the CCP and its affiliated organizations is the right thing to do. It will play a role when the number reaches a certain level.”

A Tibetan, Lobsang Samten, stood on the sidewalk and listened to those who spoke. He said, “The CCP creates lots of problems, including not allowing Tibetans to follow their own belief. In China, all one hears is the CCP’s lies—from school to the newspapers and radio broadcasts. It is hard to differentiate right from wrong.” After hearing that more than 100 million Chinese people have quit the CCP and its affiliated organizations, he said, “That is good news! China will change sooner or later.”

“Houston, TX: Practitioners Call for an End to the Persecution in Front of the Chinese Consulate (Photos) ”