Australia Fa Conference: Practitioners Share Experiences of Looking Within and Harmonizing the One Body (Photos)

(Minghui.org) The annual Australia Falun Dafa Cultivation Experience Sharing Conference was held on July 15, 2012 in Melbourne Town Hall. A thousand or so Falun Gong practitioners from across Australia attended the event and listened to practitioners share their cultivation experiences, exchange their understandings and insights, and tell their touching stories. 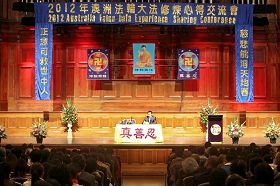 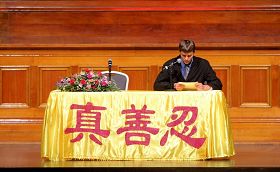 More than 20 Western and Chinese practitioners made speeches at the Fa conference. They shared their experiences of benefiting both physically and mentally after cultivating themselves according to the principles of Truthfulness-Compassion-Forbearance, and their experience of persistently raising awareness about Falun Gong and the persecution to people from all walks of life. The oldest practitioner speaker, who is 74 years old, has made a persistent effort to speak with tourists about Falun Gong and the persecution, and help them quit the Chinese Communist Party (CCP) and its affiliated organizations all year long at a tourist site. She helped several thousand Chinese people renounce the CCP organizations in six months. A 7-year-old practitioner read the more than 300 pages of Zhuan Falun when she was 4 years old.

The 7-year-old practitioner came to Australia two months ago from China. She shared her experience of growing up and practicing cultivation in a practitioner's family, and assisting her mother in truth clarification efforts. She said that the first time she gave an amulet with Falun Gong messages on it to a kind salesperson when she was 4 years old, the salesperson thanked her repeatedly in tears. In school, her classmate casually took away her beautiful pencil but was reluctant to play with her. She was sad, but after exchanging her thoughts with her mother, she realized her selfishness. After she let go of her selfishness, that classmate returned the pencil and played with her as before.

Several practitioners working on the Epoch Times and NTD Television discussed how they encountered all kinds of xinxing tests while doing the media work and how they abandoned their attachments through looking within. One practitioner from Queensland began practicing Falun Gong two years ago, and he almost grew up together with local Epoch Times newspaper that has been running for three years. He shared, “When encountering conflicts, we should check ourselves more, and look within to eliminate the attachments. When Master saw that I did something right, He right away gave me an opportunity to expand my mental capacity. If I was able to keep myself in control, I wouldn't lose anything, instead, I was provided a good opportunity to improve my xinxing. Only by letting go of self, can I better harmonize the whole entity.”

An NTD Television reporter from Melbourne told her experience of a near-fatal car accident one year ago. As she was driving through the Railway Road intersection, she was so fatigued that she fell asleep. She woke up within seconds, finding that her car had turned 90 degrees and was smoking. She was lying on the ground. Two vehicles parked at the intersection were damaged. She only sustained a small abrasion at the corner of her eye. She said, “In my dream, I felt a pair of huge hands hold me up and gently put me down. Revered Master protected me.”

A practitioner from Sydney shared how she cultivated away her resentment and benevolently resolved a bad karmic relationship. She had developed a strong sense of resentment due to her family's misfortune in her childhood and her husband's behavior after she got married. She began practicing Falun Gong in her senior year of college, and this resentment became a difficult test on her cultivation path. She said, “I said to myself, the Fa is so immense, I don't believe that I can't pass this test! I will definitely restore all this, and I will be responsible to my sentient beings. This thought is as firm and solid as diamond.”

Her steadfast belief in Dafa did make a difference. Her husband, who used to not support her in doing Dafa work and even cursed and tore up Falun Gong books, changed to another person. He supported her, and took initiative to do household chores so that she wouldn't have to worry about her family when promoting Shen Yun Performing Arts. She said, “My family environment is worlds apart from several years ago. It's the manifestation of Dafa's mighty virtue!”

A 74-year-old practitioner realized her responsibility and spent more than 10 days writing a 9,000-word long letter. After she mailed the letter to practitioners in China, she said, “It's a part of my cultivation to remind fellow practitioners to return home together. It is also what I should do. It seems that it took me much time to write the letter, actually I'm the biggest beneficiary.”

“After I had the sense of urgency to save people, I went to a tourist site, navigating through tourists to look for those who have a predestined relationship, rain or shine,” she said. She was able to help several thousand Chinese people renounce the CCP organizations in the first half of 2012. She also understood that when her thoughts are pure and clean, the righteous thoughts she sends forth must be powerful.

A Western practitioner from Sydney shared his experience of practicing cultivation in many different places during his 9-year cultivation. He said, “We are here at this special period of time. Letting go of human attachments is not to gain something for ourselves, but to be able to help more sentient beings to be saved. It's the selfless realm that our Fa-rectification period Dafa disciples should achieve.”

When promoting Shen Yun, he realized that many people busy themselves daily to satisfy their desires and their endless pursuit of their illusions, and all this is not at all what they truly need. He overcame nervousness when introducing Shen Yun to distinguished guests or big companies. He said, “I find that my ability to cooperate with fellow practitioners is enhanced, I'm no longer confined to formality or how to begin to deal with things, and my effort to clarify the facts has turned out to be more successful. When we take lightly our own thoughts, only having the heart to assist Master in accomplishing our grand vows, everything that we need to do we are able do it well!

The atmosphere of the Fa conference was holy and solemn. It was a grand occasion for all Falun Gong practitioners in Australia to exchange understandings and insights, compare with each other in Fa study and cultivation, and spread the righteous Fa. It is worth mentioning that the Melbourne Town Hall sponsored part of the impressive venue fee.