(Minghui.org) A large-scale rally and march were held on July 8, 2012 in District 13, to support 119 million Chinese quitting the Chinese Communist Party (CCP) and its affiliated organizations. Falun Gong practitioners from various European countries participated in the activity. The European Tian Guo Marching Band (Divine Land Marching Band) performed at the event. Great orchestral music and various banners attracted many Chinese to stop and watch the march. 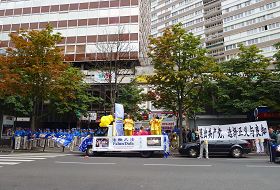 Supporting 119 million withdrawals from the CCP and its affiliated organizations 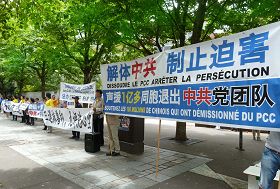 Volunteers from the Quitting the Chinese Communist Party Center distributed fliers containing Falun Gong information along the parade route. Many Chinese and French people accepted fliers and showed their shock upon learning of the ongoing persecution of Falun Gong practitioners in China. The messages on banners, in both Chinese and French languages read, Quitting CCP Will Erase Your Mark of the Beast, Nine Commentaries Can Open Your Mind; The Collapse of CCP is the Will of Divine Beings; Distribute the Nine Commentaries, Quit the CCP and its Affiliated Organizations; Erase the Evil Oath you Swore To for your Own Safety; Meeting With a New Era Without the CCP; 60 Years of CCP Tyranny has Destroyed 5000 Years of Civilization in China.

Ms. Pan Chaorong is the person-in-charge of the Global Center for Quitting the Chinese Communist Party in Europe. She said that the center for quitting the CCP serves Chinese with volunteers. The purpose of the center is to help Chinese people who joined the evil CCP and its affiliated organizations, to erase their oath of “Devoting my life to the cause of Communism and fight for Communism for the rest of my life” when they joined the CCP, which will bring them a better future. Ms. Pan then explained why Chinese should quit the CCP and its affiliated organizations. In fact, in Western countries, she said, no matter whether you have belief or not, what religion you believe in, or what Party you belong to, none of the organizations ask you to swear with an oath to devote your life to it. Only the CCP forces its members to take such an evil oath. Quitting the CCP is for self-salvation purposes and for the disintegration of the CCP as well. 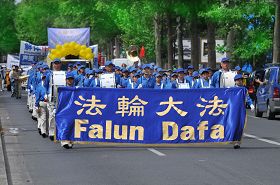 Mr. Wu Jiang, chairman of the French China Democracy Party, said, “Over the past more than 60 years, the evil CCP has killed more than eighty million Chinese and committed numerous horrible crimes. In Guizhou Province, a stone was found with naturally-formed words reading, 'Chinese Communist Party Collapses'. I believe this phenomenon shows the will of God.” Mr. Wu said in the interview, “The tyranny of the Chinese Communist Party is maintained by lies and violence. Nowadays, more and more Chinese have begun to recognize the essence of the CCP and quit. We should support their brave behavior. We should show concern over the movement of quitting the CCP in this historic period, which indicates the awakening of the Chinese.

One Chinese person asked about the situation of quitting the CCP and took photos. He said, “If this (quitting the CCP) trend continues, the CCP will collapse very soon.” Another Chinese man said to the reporter, “The situation in China and outside of China are two different worlds. Police in China arrest and torture Falun Gong practitioners, whereas police here protect practitioners and stop vehicles to help paraders to get past, which looks incredible. Some Chinese announced their resignation from the CCP on the spot to clear the mark of beast and ensure a better future.