Partially Paralyzed and in a Wheelchair, Ms. Wang Jiping Detained in Nanjing Women's Prison for More Than Six Years

(Minghui.org) Ms. Wang Jiping is a Falun Gong practitioner from Tongzhou City, Jiangshu Province. She was sent to Jiangsu Province Women's Forced Labor Camp in 2001, to serve a two-and-a-half-year term. She was brutally tortured to the point of disability by guards and convicts.

On April 11, 2003, when her family brought her back home, Ms. Wang Jiping had two broken ribs, her stomach was filled with pus, and a steel rod had been placed in her spine. She couldn't move without using a wheelchair.

In March 2006, Ms. Wang was sentenced to six and a half years in jail because she persisted in practicing Falun Gong. Even though she was already in a wheelchair, she was sent to Nanjing Women's Prison. Despite her already fragile physical condition, she was brutally beaten in the prison and subjected to various torture methods. Her detention term will end in October 2012. 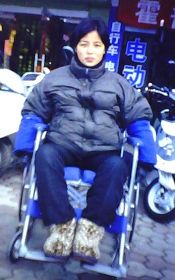 This photo was taken in 2006 before Ms. Wang Jiping was arrested again

On January 29, 2001, Ms. Wang Jiping was sentenced to two and a half years of forced labor. At that time, she was healthy. But while she was detained during the next two years, she was subjected to many kinds of torture.

In late March 2011, in attempts to force Ms. Wang Jiping to write a guarantee statement, Liao Qi, political head of the labor camp, Zhao Yulan, political head of Division No. 3, Xiao Jiantao, head of Division No. 3, along with several other people, forcibly removed Ms. Wang's winter jacket, handcuffed her hands behind her back, and shocked her with two electric batons on her palms, arms, face, neck, back, and bottoms of her feet. Ms. Wang passed out.

One day in March 2001, when Ms. Wang Jiping tried to practice the exercises, a prostitute grabbed the front of her clothing and dragged her, with her head down, from the second floor to the first floor, down the stairs. Female guard Zhang Yan saw it but she didn't stop it. Instead, she locked up Ms. Wang in the “reflection room.”

In May 2001, Ms. Wang and several other practitioners were abused. They were forced to stand still for entire days, and not allowed to sleep at night. Each practitioner was forced to stand on a brick. Guards instructed prostitutes and drug addicts to monitor them. At night, many mosquitoes swarmed around their faces, necks, and hands. Their bodies became covered with mosquito bites and they did not recover from them for a few months.

As a form of torture, Ms. Wang was forced to stand for eight days and nights without sleeping.

Attempting to "transform" Ms. Wang, the perpetrators began torturing her again on February 2, 2003. She was also deprived of sleep. For the first three days, female guard Wang instructed drug addict Chen Jing to force Ms. Wang to sit on a tiny stool, and to prevent her from sleeping. On the fourth day, Chen Jing told Ms. Wang, “Wang wants you to stand the whole day and night. No sitting, no sleeping.” Ms. Wang was abused this way for three days and nights. 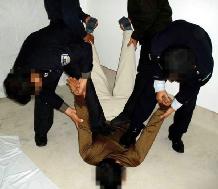 On the morning of the seventh day, Ms. Wang's feet were swollen and became black and blue. At night, Wang instructed four prisoners to shove Ms. Wang onto an iron bedside cupboard with their bodies and legs pressed on Ms. Wang's back and legs. They forced Ms. Wang to write “homework.”

After this, Ms. Wang's back was in so much pain that she could not get up from the bed by herself. But the female guards still instructed prisoners to drag her around. Every day, Ms. Wang screamed from the pain.

In addition, prisoner Sun Yonghong intentionally hit Ms. Wang's back, waist, and legs. Ms. Wang protested this torture several times, and told them that her legs had almost no feeling. But no one listened to her. The abuse continued.

Constantly tortured this way, Ms. Wang's entire body was in pain and she could only move very slowly. But Sun Yonghong and Xiang Juan carried Ms. Wang together, and dragged her to walk very fast, then turned around quickly, then walked, then turned around, etc. They abused her this way for more than ten days, and gradually Ms. Wang felt her legs getting weaker and weaker, and she finally lost consciousness.

On April 11, 2003, Ms. Wang couldn't move a single muscle due to the torture. To avoid being held responsible for her condition, the labor camp told her family to take her back home. Ms. Wang's husband sent her to Nantong City Hospital in Jiangsu Province for treatment. She was diagnosed with thoracic vertebra tuberculosis and lumbar vertebra tuberculosis. A steel rod was placed in her spine. She stayed in the hospital for more than two months and had two surgeries. The medical care cost more than 50,000 yuan. Ms. Wang lay in bed for three years. Finally in 2006 she was able to leave in a wheelchair, but her legs were still paralyzed.