(Minghui.org) I remember that February 7, 1999 was an especially beautiful, sunny day. I was on the grass lawn at the center of Darling Harbor in Sydney, Australia, with almost 1,000 other practitioners. Many of them had traveled long distances across Australia, from as far away as Perth, Brisbane, the Gold Coast and Melbourne. Some practitioners even traveled from China to be here. We were busy inserting poles or arranging mats on the ground, tying string to designate specific areas or changing into the light yellow jackets and white pants of the exercise costumes.

After everything had been meticulously arranged, practitioners took their places on the mats to form the Chinese characters “Truthfulness-Compassion-Forbearance” on the ground. The atmosphere was solemn and harmonious, as we performed the exercises to the graceful exercise music. It was as though it was reverberating between heaven and earth. I feel extremely fortunate and happy remembering these times. 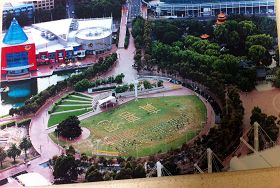 Aerial view of the practitioners performing the exercises on the lawn

Three eye-catching yellow Chinese characters, “Truthfulness-Compassion-Forbearance,” could be seen from high above, and banners reading “Falun Gong” and “Falun Dafa is good” could be seen on fluttering in the air. Forty yellow balloons were gently swinging in the breeze, and the lawn, a blanket of green, contrasted beautifully with the sunlight, as everything was in perfect order, brilliant and magnificent.

Many people were drawn by this wonderful display, and within a short space of time, some of the spectators had lined up with the practitioners to learn the exercises. A reporter from a Chinese television station also arrived and did a live broadcast. Practitioners explained to him that the main purpose of the large scale event was to let people know that Falun Gong is not only good for one's health, but also teaches people the principles of Truthfulness-Compassion-Forbearance, to help improve one's moral character. They also informed him that Falun Gong has been widely spread throughout China and the world. The reporter then went off to interview a few practitioners.

As the sun was setting and and the event was ending, some practitioners were showing others photos of the day's event that had just developed in the studio. Many practitioners were moved to tears when they saw the results of what they had been a part of. One practitioner looked at the photograph and said, “Look! I'm here. I'm part of the character that spells Forbearance.” Another said, “I'm here, right below the people that form the character for Compassion.”

Although thirteen years have passed, that remarkable and outstanding sight clearly comes to my mind and brings up all sorts of feelings. I can recall in an instant the warmth and faith of practitioners and their concerted efforts to fulfill the desire to spread the Fa on a large scale. Everyone felt that this was Master's great compassion and blessing, and was filled with infinite gratitude for Master's great benevolence.