(Minghui.org) On March 22, 2011 Mr Yi Song, a master's degree student in Polymer Chemistry from Changzhou University in Jiangsu Province was arrested by police from Wujing District Domestic Security Division and Jiaocheng Police Station in Changzhou City. He was taken to a brainwashing center and locked up for 22 days as well as detained at a detention center for 46 days. He was subsequently taken to Fangqiang Labor Camp and subjected to beatings with electric batons and other forms of torture.

On July 18, 2011 Gu Yili, a political head at the labor camp, threatened Yi Song: “We will carry out strong measures. This cannot change people's hearts, but it can deform your physical body.” 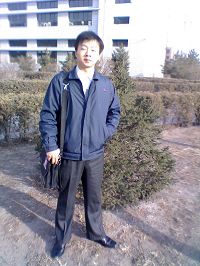 On July 19, as instructed by Gu Yili, six to seven prisoners surrounded Yi Song and took turns reading a book which slanders Falun Gong. Some of them intentionally read close to his ear. In the afternoon at the canteen, Yi Song shouted: “Falun Dafa is good; Falun Dafa is the righteous way” to hundreds of prisoners. Subsequently, Gu Yili ordered two prisoners to carry Yi Song back to a transforming room where he was forced to squat on the floor. Gu Yili viciously kicked Yi Song's face, and when he tried to stand up, he was slapped hard in the face.

Afterwards, guards Zhu Kanglin and Jiang Xinhai dragged Yi Song into the conference room. Gu Yili began to shock Yi Song with an electric baton. After a while, guard Pan Yuehua shouted: “Strip off his clothes!” and thus Yi Song's top was taken off. There were six guards in the conference room. Some stood on the side watching while others held him to the ground and stepped on his body. Gu Yili shocked his head, neck, face, mouth, back, arm pits and arms with the electric baton and even asked for another electric baton to be brought over.

Yi Song was subjected to electric shock for a very long time. As a result, he lost control of his bowel movements. His whole body broke out in a sweat; he lay on the floor, unable to move, and gasping for air. Then, division head Xu Yuhong asked if he would admit to his crime, and he was forced to say that he was wrong. Xu taped his words with a cell phone. Gu Yili wrote down the incident, and Zhu Xiaoyun subsequently put handcuffs on him. After a while, Pan Yuehua asked Yi Song to make a public confession of his wrongdoings and write a statement promising to give up Falun Gong. He threatened to report the canteen incident to his superiors and extend his prison sentence if he did not comply. Yi Song did everything he was asked for fear of being tortured again.

2. A Good Student Arrested and Subjected to Brainwashing

Yi Song, 26 years old, is from Baiguo Town in Macheng City, Hubei Province. On March 22, 2011 he was arrested by police from the Domestic Security Division of Wujing District and Jiaocheng Police Station in Changzhou City for distributing Falun Gong DVDs.

After his arrest, senior officials in the school sent teachers to find out more about Yi Song's personality from his classmates and teachers. The comments received were that he is kind hearted and has a sense of justice; that he also has very strong research capabilities. Yet on the night of March 22, such a good student was arrested and taken to a brainwashing center without any legal process. The brainwashing center was located on the first level of Jinhai International Hotel in Changzhou City. Yi Song was forced to undergo brainwashing by agents from Changzhou City 610 Office.

On April 8 around 9:00 a.m., Yi Song's mother and two family members went to Changzhou hoping to see him. However, the head of the 610 Office, Ji Liming, refused to listen to her appeals and kept berating her in public. Yi Song's family repeatedly asked to see him, but Ji Liming replied: “Not so easy. You cannot see him.”

His family pleaded: “He has been locked up in the brainwashing center and missed lessons for such a long time. This will affect his studies. If the pressure is too great, he will break down.”

The security staff told them: “Our leader Ji's greatest concern now is to transform Yi Song and will spare no efforts to change his thinking. Other matters are not important.”

3. Tortured at the Labor Camp

On May 30, 2011, after 22 days at a brainwashing center and 46 days in custody at a detention center, Yi Song was sent to Fangqiang Labor Camp in Jiangsu Province for further detention and persecution.

During his imprisonment at the labor camp, just like other practitioners, Yi Song was brainwashed and went through a week of conversations. Every day thereafter guards forced him to watch shows and read books slandering Falun Gong as well as write reports on his thoughts. At any slight resistance, he would be violently threatened by guards, forbidden from sleeping, and shocked with electric baton and other forms of torture. Every practitioner was watched 24 hours a day by prison convicts, as ordered by the guards. Practitioners were not allowed to talk to each other or to do the exercises. Convicts were coerced into closely monitoring practitioners by rewarding them with reduced prison sentences.

Because Yi Song refused to give up his belief and refused to cooperate with the guards at the brainwashing center, he was often brutally beaten up by Gu Yili, political head of the No. 4 division. Gu Yili also shocked him with an electric baton for long periods of time.

One day in July 2011 political head Wei Honghui asked Yi Song to write down his understanding and was turned down. Wei immediately slapped him hard in the face. The next day, Wei asked him to write his understandings again and was rejected again. Wei ordered the head of the prison cell, Jia Aijun, to prevent him from sleeping at night.

Every year Tang Guofang, the head of the provincial labor camp bureau education section, conducts several inspections at the labor camps. Before these inspections are conducted, the guards at the labor camp carry out intensive brainwashing of practitioners and force them to verbalize as well as write down material according to what they were told.

On November 19, 2011 in the afternoon, after two days of conversations, political head Wei Honghui still could not transform Yi Song. She stood up and threatened: “What was it like the last time you were shocked with the electric baton?” When Yi Song replied: “It was painful”, she continued: “Do you want me to give that kind of pain every day?” Just then, guard Zhu Kanglin came over and looked at Yi Song angrily. Yi Song was forced to change his words, and Wei was pacified. Wei also kept emphasizing to Yi Song not to divulge that he was shocked with electric batons during the inspection, which was to be conducted a few days later.

At the labor camp, such incidents of violent threats and torture didn't happen only to Yi Song. Every practitioner there has been tortured. For example, Wang Biao was threatened by head guard, Xu Yuhong, for doing the exercises in the prison cell. Dai Shaodong was forced to copy books slandering Falun Gong, and Zhou Qingmao was shocked with electric baton many times because he refused to write his understandings. Sun Xiao was shocked with three electric batons simultaneously, and Cao Xijiang was covered with a blanket and beaten by convicts. During the past few years, it has been evident from many facts that brutal threats and torture are still very common occurrences in labor camps.

“Ms. Li Guizhen from Sanmenxia City Dies as a Result of Persecution”