(Minghui.org) Falun Gong practitioners in Finland held a weekend truth-clarification activity in Riviera Park in downtown Helsinki. They introduced the practice of Falun Gong, talked to people about the principles of Truthfulness-Compassion-Forbearance, and raised awareness of the 13-year brutal persecution of Falun Gong by the Chinese Communist Party (CCP). 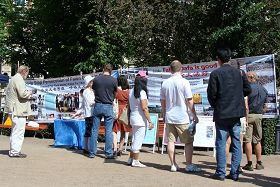 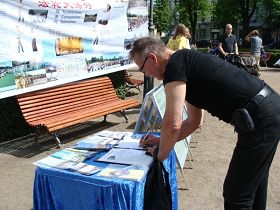 A passerby signs a petition to support Falun Gong 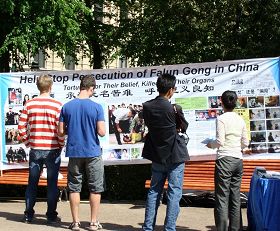 There were many visitors strolling in the park early Saturday morning. The practitioners' large banners were so conspicuous that many people walked up to take a look. After a young couple carefully read the contents of the banners, a practitioner talked to them about the persecution of Falun Gong in China. The couple were upset after learning about the situation. When they heard that they could help practitioners by signing a petition, they signed right away to express their support for Falun Gong.

A practitioner who participated in the activity said that most Chinese people are quite clear about the truth; they know about the quitting the CCP movement, and are willing to take truth-clarification materials. Some Chinese people came closer to the banners to read the information about the staged Tiananmen self-immolation incident and other aspects of the persecution.

A man told a practitioner that he was deeply stirred by the reenactment of torture methods that the CCP uses on practitioners in China. He said that he had read part of Zhuan Falun, and felt that the book is profound. “Your teacher is remarkable!” he said, and added, “I also learned about the persecution in China. You're really brave and remarkable. I wish you success.”

Eija, who was waiting in line to sign the petition, said to a practitioner, “The persecution is really unbelievable, and it is even ongoing now. It's incredible. It absolutely must stop.”

A woman who saw the banners exposing the persecution wanted to offer help by donating some money to the practitioners. A practitioner told her that they couldn't accept her money, but she could help by signing the petition to support Falun Gong practitioners' efforts to end the persecution. The woman signed right away.

Among the visitors were a Russian man and his daughter who appeared to be around 4 years old. When they stopped to look at the banners, a practitioner handed the man a copy of informational materials in Russian, and talked to him about the practice and the brutality of the persecution. The father listened attentively while his daughter quietly stood watching the practitioners demonstrating the Falun Gong exercises.