(Minghui.org) On June 16, Falun Gong practitioners from Freiburg im Breisgau, Germany, held an “Information Day” activity downtown, introducing Falun Gong and exposing the persecution of the practice to the public. 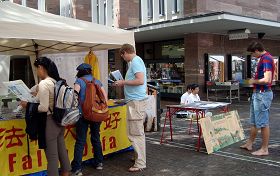 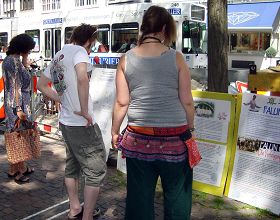 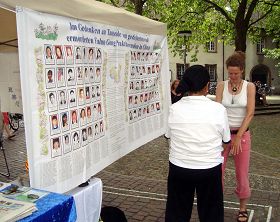 It was a sunny day. Many people stopped at the practitioners' booth, asking to learn more about Falun Gong, and signing the petition.

An older German lady talked for a while with practitioners. She said: “Freedom is important to everybody, but Chinese people cannot enjoy it in China. I will tell my Chinese friends about what I learned today. ” Fully aware of the ruthlessness of the Communist Party, she reminded the practitioners to be careful about their safety.

Three young ladies viewed the display boards for 30 minutes. They also asked all kinds of questions. Finally they signed the petition, condemning the persecution. They thanked practitioners and wished practitioners luck.

Another Chinese student told practitioners that she knew about the persecution and she knew that the Communist Party's propaganda against Falun Gong is not true. “I will not allow my kids to join the communist organizations. I support your efforts of exposing the evilness of the Communist Party. You are helping to dismantle this evil power.”