(Minghui.org) Ever since Falun Dafa was introduced to Dallas-Fort Worth in 1996, Falun Dafa practitioners have held many free introductory workshops in public places such as city libraries and public parks, and practitioners have participated in many community events. On the occasion of the i[coming World Falun Dafa Day on May 13th, 2012, Arlington Mayor Robert Cluck issued a proclamation declaring May 13th, 2012 as Falun Dafa Day, commending Master Li Hongzhi, the founder of Falun Dafa, for helping millions across the world improve their health and moral standards. Below is the text of the proclamation.

Whereas, Falun Dafa, also known as Falun Gong, is a peaceful self-improvement practice rooted in ancient Chinese culture that centers around the universal principle of Truthfulness, Compassion, and Forbearance and it consist of five gentle exercises, including meditation; and

Whereas, Master Li Hongzhi, the founder of Falun Dafa, has helped millions across the world improving their health and moral standards, as well as deepen their understanding of life, humanity and universe, through the practice of Falun Dafa; and

Whereas, transcending culture and racial boundaries, Falun Dafa has touched the lives of more than 100 million people in over 80 countries, more men and women in the United States are learning the practice and purifying their hearts, energizing their bodies, and striving to create virtuous communities; and

Whereas, Falun Dafa was first introduced to the public in 1992 in China and was introduced to Dallas-Fort Worth in 1996. Since then, many free introductory workshops have been held in public places such as city libraries and public parks, and practitioners have participated in many community events; and

Now, Therefore, I, Dr. Robert N. Cluck, Mayor of the City of Arlington, Texas, and on behalf of the Arlington City Council, do hereby proclaim May 13, 2012 as

In Witness Whereof, I have hereunto set my hand and caused the Seal of the City to be affixed this 30th day of April in the year of Our Lord two thousand and twelve. 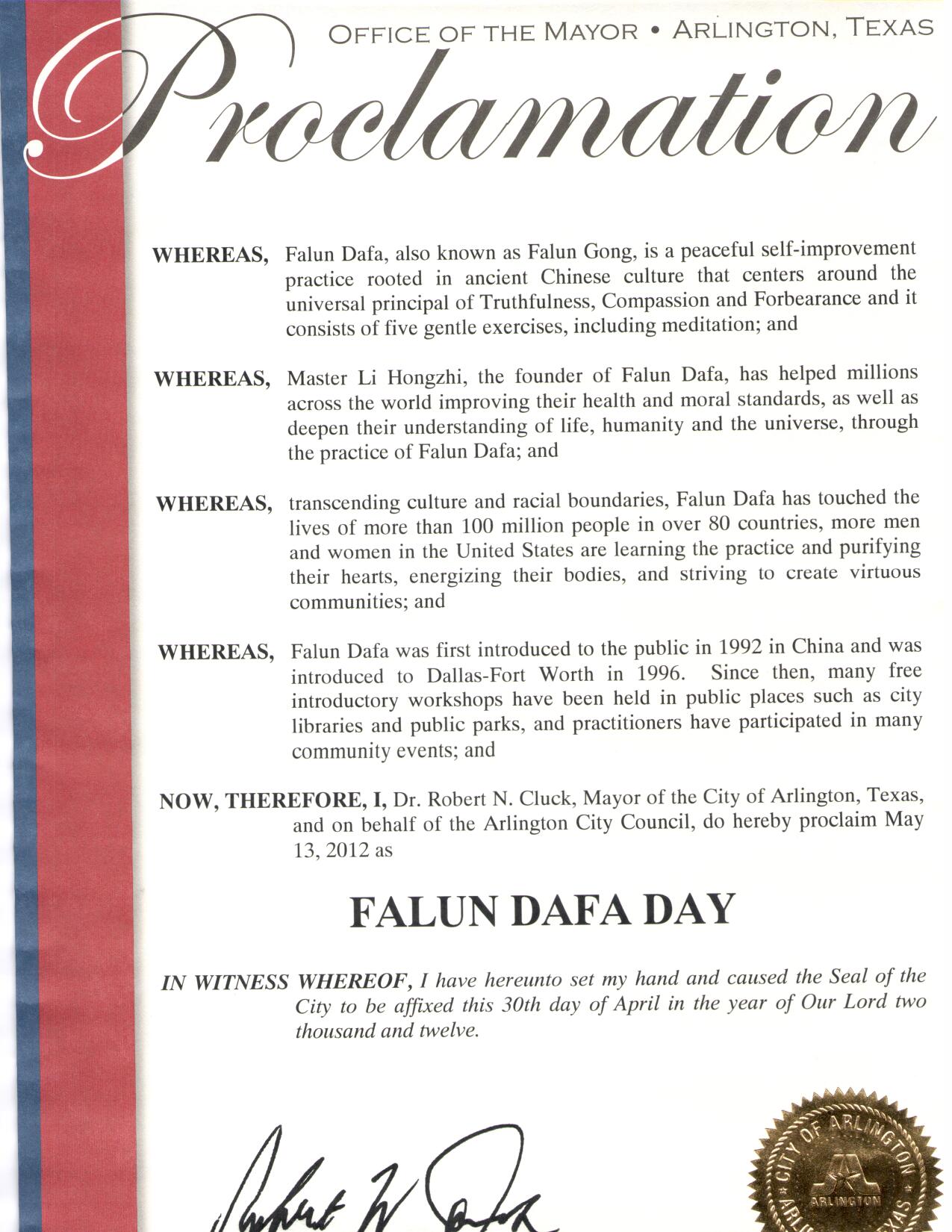