(Minghui.org) April 25, 2012 is the thirteenth anniversary of the peaceful appeal by over 10,000 Falun Gong practitioners in China. During the rush hour in the afternoon, Falun Gong practitioners in the UK held a protest of the persecution at the Chinese Embassy in London. They inherited the peaceful and rational spirit of the April 25 appeal. During the protest, practitioners spread the truth about Falun Gong and exposed the lies of the Chinese Communist regime. They also appealed to the conscience of the general public, calling on them to help stop this persecution. 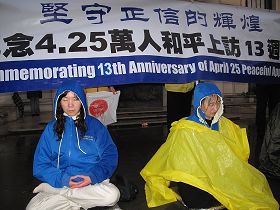 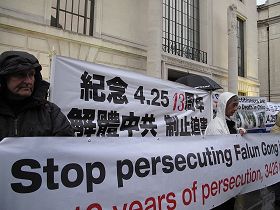 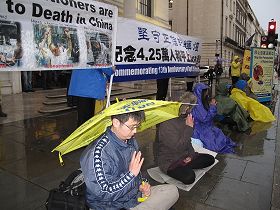 The weather was very bad on the day of the protest. During the four-hour protest activity, it was rainy with occasional thundershowers and heavy winds. Despite this, Falun Gong practitioners were not moved. They demonstrated the five sets of the Falun Gong exercises and firmly held banners reading “Falun Dafa is Good,” “Commemorating the 13th Anniversary of Peaceful “April 25” Appeal,” “Stop Persecuting Falun Gong,” and others, in both English and Chinese. There were also practitioners distributing leaflets.

The perseverance showed by the practitioners in the heavy rain moved many drivers and passersby. People felt the Falun Gong practitioners' unshakable faith in their righteous belief. Many people expressed their shock about the persecution and wanted to learn more.

Why do Falun Gong practitioners persevere in the rain to raise awareness of these facts?

She said, “The Chinese Communist regime's persecution of Falun Gong has been ongoing for over ten years now. The regime continues to persecute Falun Gong. I think that as long as the regime doesn't stop the persecution and the regime isn't disintegrated, I will come here every year.”

“Truthfulness-Compassion-Forbearance are the principles followed by Falun Gong practitioners. It has been proven that by following these principles, people practicing Falun Gong have improved greatly in their physical and spiritual well being. Therefore we want to tell people the facts. That's why we have such strong spirit, despite wind and rain, no matter what happens. Maintaining our righteous belief is our responsibility.”

In recent years, Ms. Zhou has been clarifying the facts about Falun Gong to Chinese people in Cambridge. She is very pleased that more and more Chinese people are gradually realizing the lies spread by the Chinese Communist regime.

“Through our persistently telling the facts to Chinese people over ten years, many people truly understand the situation. They want to listen and learn more. We told them that it was within Falun Gong practitioners' basic human rights to hold the peaceful appeal then. Nowadays there are a few Internet sites showing the photos and describing the circumstances of the peaceful April 25 appeal. People are beginning to realize that wherever Falun Gong practitioners go, they show kindness and tolerance. They don't act aggressively. Practitioners would never display “siege” behavior as the Chinese Communist regime depicted.” “So the lies will not last long. They will be broken by the truth. But Falun Gong practitioners need to continue their efforts to clarify the truth to the general public.”

Thirteen years ago, the large-scale peaceful appeal by over 10,000 Falun Gong practitioners shocked the world. It is known as the largest ever, and the most peaceful and rational appeal in Chinese history. The appeal was clearly recognized by the international community. Thirteen years later, the peaceful activities to commemorate the April 25 event by UK Falun Gong practitioners continue to receive a positive response from the general public. 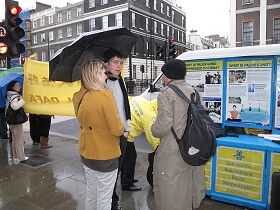 Mataya Van Wijf says that it's important to demand justice

Mataya Van Wijf is a young Dutch fellow who is temporarily visiting London. He works for a religious organization. This afternoon, he happened to meet Falun Gong practitioners who were attending the April 25th commemoration activity. It was the first time he had heard about Falun Gong. After watching the peaceful activity for a while, he immediately found a western practitioner to learn more about Falun Gong. He talked to the practitioner for over half an hour, beginning with learning what Falun Gong is about. When being interviewed by the reporter, Mataya said that he understands and supports Falun Gong practitioners' peaceful protest of the persecution.

He said, “From what I learned, it is terrible that the persecution happened. I believe in justice. I believe that everyone should have freedom of belief. They should not be subjected to oppression and control by the autocratic regime.” “I think that activities in the pursuit of justice are always worth doing. It is very good to have such a peaceful protest, attracting people's attention. I never heard of Falun Gong before. Now I know. In fact I am interested in learning more about Falun Gong. Spreading justice is very important.” 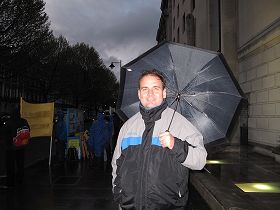 He said, “This persecution is terrible. It violates the human rights. This persecution must be stopped. I support your efforts. Your activity is so peaceful. I can see that you have many people, yet very peaceful. You gather together here quietly, silently conveying your message. I hope your message will be well received. What you are doing will awaken the public. You set a good example for other countries.”

“Changing My Notions, My Deafness Was Cured ”

“Boston: Spreading the Fa on the Campus of MIT (Photos) ”