(Minghui.org) Jason Loftus is a practitioner from Toronto. He was one of the more than 7000 Falun Gong practitioners who gathered in New York in mid-May to celebrate World Falun Dafa Day, and the 20th anniversary of Falun Dafa’s pubic introduction. He began practicing Falun Gong in 1998, and he experienced the goodness of Dafa before the persecution begun and prior to all the negative propaganda fabricated by the Chinese Communist Party (CCP). He knew from deep within his heart that all the CCP propaganda was not true, and was wrong. 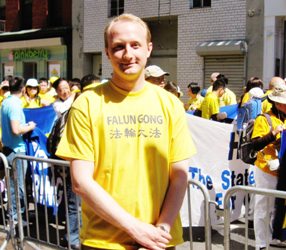 For Jason, the most important change he experienced after he began practicing Falun Gong, was understanding the true meaning of life. This knowledge changed every aspect of his life. It was like waking from sleep and only now really becoming alive.

Jason said, “Through cultivation, instead of getting wrapped up in our own human achievements and our own personal things, we become better people, raise our moral standard, and return to our true selves.”

Why are we here? What is the ultimate objective of being a human being? It becomes very clear and rewarding.

That is why, Jason believes, that in the face of such severe persecution in China, Falun Gong practitioners can courageously validate Falun Dafa and spread the facts without worrying about themselves. When one understands the true meaning of life, one has that confidence.

Jason is honored to have learned Falun Gong and to benefit from it. Jason has been very much involved during the past 13 years in trying to bring people the truth about Falun Gong.

In early February 2002 Jason and another practitioner from the U.S. went to Beijing to protest the persecution on Tiananmen Square and expose the CCP-staged self-immolation.

They held a press conference with the Western Media, and showed them a video-deconstruction of the self-immolation incident, proving that the CCP intentionally set up this event.

This was an important way to spread the facts, because the CCP used this hoax to attack Falun Gong and create hatred among China's people. The practitioners exposed it.

Then they went to Tiananmen Square to hold the banner worded "Falun Dafa is good." When the CCP police showed up, they tried to clarify the truth about the CCP-staged self-immolation incident, and expose the lies, but were surrounded, grabbed, and dragged away. When they were arrested they shouted “Falun Dafa is good!” They could see how everyday people were shocked to hear these words.

Jason said that Chinese people actually misunderstand Falun Gong, not because they are bad people, but due to the slanderous propaganda by the CCP. They don't have an opportunity to know the truth.

He thinks that it is very important to spread the truth and that is why Falun Gong practitioners all these years have persisted in their efforts.

Due to the media being censored by the CCP, the public in China does not know the truth about Falun Gong. Practitioners came to this big event in New York to let people know about the persecution, and the deception created by the CCP.

Because New York is a financial and a media center of the World this event is important in spreading the truth about Falun Gong. This is the reason for all practitioners coming here. They want to clarify the truth about the benefits of Falun Gong.

To Jason the issue of persecution of Falun Gong affects not only China, but the whole world. Because we are all connected, it affects all of us as well. He is concerned about it and wants people to know the truth.

Right now a historic change is taking place in China. Jason believes that in the future those who sided with justice, and practitioners, will realize that they made the right choice. Though everyone is just an individual, it is important for their own futures, to take the right stance.

Traditional Chinese values are, “Good will be rewarded with good and evil begets evil returns.”

Practitioners from around the world are not doing this for themselves, but because they are concerned with the fates of other people. They are truly concerned for those who have not yet consciously made the righteous choice.

Looking back, Jason remembers how difficult it was in the beginning to spread the facts about Falun Gong. People in the West simply didn't know anything about Falun Gong. All the information was coming from only one source, the slanderous lies made by the CCP. It has been difficult for practitioners in this environment to step forward. Stepping forward was difficult, but the right thing to do. It was done unselfishly and for other people. In the face of this persecution people have not only learned about Falun Gong, but the popularity of Falun Gong around the world has also grown.