(Minghui.org) On May 9, 2012, Pennsylvania Senate issued a Statement of Congratulations recognizing the Greater Philadelphia Falun Dafa Association upon World Falun Dafa Day, the momentous occasion; extending warmest wishes for a future replete with ever-increasing success and service to the community.

Whereas, the Senate of Pennsylvania takes great pride in recognizing those organizations which, through adherence to the highest standards of service, contribute in a meaningful way toward a better and more productive society; and

Whereas, the greater Philadelphia Falun Dafa Association is observing World Falun Dafa Day May 20, 2012; and

Whereas, Falun Gong, also called Falun Dafa, is a peaceful spiritual practice based in traditional Chinese culture. Although rooted in ancient Chinese spiritual tradition, Falun Dafa was first taught publicly in China in 1992 by Li Hongzhi, the founder of the practice. Today it is practiced in more than eighty countries worldwide by people of all ages and backgrounds. It is always taught free of charge by volunteers and can be practiced individually or in groups. Falun Dafa practitioners across the United States dedicate countless hours to their communities by organizing free meditation classes and Chinese cultural productions of music and dance and by participating in local events.

Now therefore, the State of the Commonwealth of Pennsylvania proudly recognizes the Greater Philadelphia Falun Dafa Association upon this momentous occasion; extends warmest wishes for a future replete with ever-increasing success and service to the community;

And directs that a copy of this document, sponsored by Senator Charles J. McIlhinney, Jr., be transmitted to the Greater Philadelphia Falun Dafa Association. 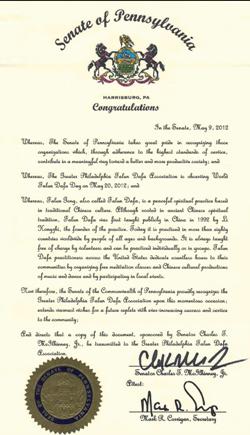