(Minghui.org) May 13 is World Falun Dafa Day and is also the annual tulip festival in Albany, New York, sponsored this year by the municipal government. Falun Gong practitioners applied for a booth at the festival and introduced Falun Gong to local residents and visitors. 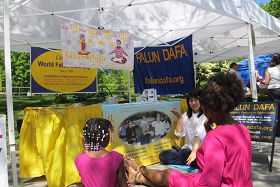 A Falun Gong practitioner teaches the exercises at the tulip festival 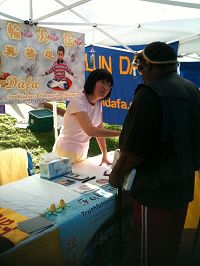 A visitor is introduced to Falun Gong

It was sunny on May 13. Hundreds of thousands people came to the festival to view the tulips. Several hundred organizations set up tents. Falun Gong practitioners’ booth was white with yellow banners and posters, eye-catching in the sunshine.

A young black man walked toward the booth. He signed the petition first and then greeted the practitioners in Chinese. He is a resident in Brooklyn, New York and came to tour Albany. He said, “I know the persecution is brutal, the CCP even harvests organs from living Falun Gong practitioners. I have seen Shen Yun four times. I like it very much.”

A Chinese family of three paused in front of the booth and greeted a practitioner they knew. The wife said a few years ago her friend’s relative practiced Falun Gong in China and disappeared in the persecution. The practitioner handed her information materials and told her the horrific news that the CCP harvests vital organs from living Falun Gong practitioners. The lady signed the petition to the President without hesitation.

A white man came to sign the petition. When asked if he knew about Falun Dafa, he said, “I know a Tibetan in business. He is a very good man. He told me about the persecution of Falun Gong.”

A handicapped lady waited for her turn to sign the petition. She signed the petition with her trembling hand and left smiling.

A tall lady paused in front of the booth and looked around. A practitioner greeted her. She said she had seen Falun Dafa practitioners' event on Times Square the day before and was moved. She came here for a tour. The practitioner introduced her to Falun Gong. She signed the petition.

A veteran with various badges on his hat came slowly to the booth with a cane. He said he was Sonny and had participated in the Vietnam War. He wished to learn the exercises and said he would come back the next day. He did return the next day and learned the first set of Falun Gong exercises.