New York: Rally in Flushing Commemorates the April 25 Peaceful Appeal and Calls for an End to the Persecution (Photos)

(Minghui.org) On April 28, 2012 more than 1,000 Falun Gong practitioners from the greater New York area, along with supporters, held a rally in Flushing, commemorating the April 25 Peaceful Appeal and calling for an end to the persecution. 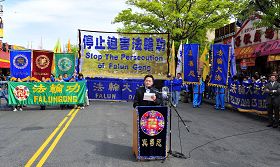 There were 16 speakers at the rally. They recalled the April 25 appeal, and pointed out that what Falun Gong practitioners have tried to protect is the moral standard for human society, and this is what the Chinese Communist Party (CCP) has tried to destroy. Mr. Li Tianxiao, a columnist in New York, expressed that the persecution of Falun Gong has awakened many Chinese people who have quit the CCP. “The persecution will lead to the destruction of the party,” he said. 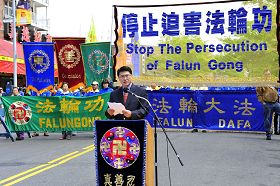 Mr. Zhang Erping, a spokesman for Falun Gong, reviewed the process of the April 25 Appeal and the brutal history of the persecution. Mr. Zhang said, “China is experiencing big changes. The Chinese society is in a transitional phase. Every Chinese has a chance to choose his or her future.” He called upon Chinese people not to assist the CCP in persecuting Falun Gong. 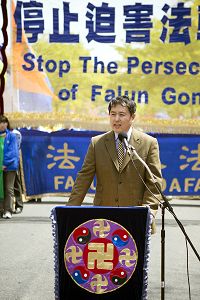 Democracy activist Mr. Wang Beiji, and Mr. Liu Guohua, the vice chair of Allies of the Guard of America, praised Falun Gong practitioners for their efforts in clarifying the truth and protecting traditional values. They believe that a bright future is coming upon China, and the murderers of the persecution will soon be brought to justice. 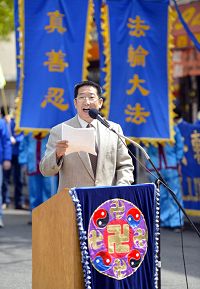 Mr. Wang Zhiyuan, spokesman for the World Organization to Investigate the Persecution of Falun Gong (WOIPFG), stated that WOIPFG has collected a great deal of evidence about Jiang Zemin, the chief culprit of the persecution, and his gang members. He warned those who have been involved in the persecution not to follow Jiang. 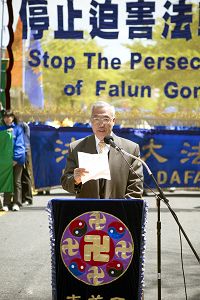