(Minghui.org) On May 13, 2012, practitioners in Kyvi, the capital of Ukraine, gathered in downtown to warmly celebrate the 20th anniversary of Falun Dafa's introduction to the public. At the same time, practitioners from three other cities also held celebratory activities in Donetsk, where the World Cup European Football Championship is going to be held. 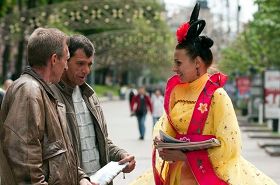 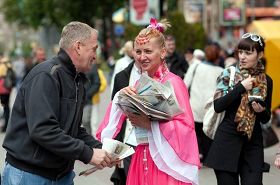 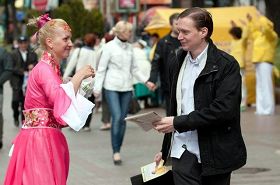 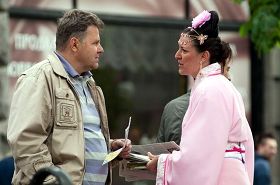 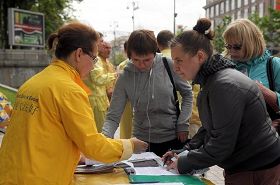 In Kyvi, before the celebration began, many reporters from TV stations were waiting to cover the event. They showed great interest in the Tang Dynasty costumes and Han Couture that practitioners wore. A practitioner said in an interview, “Falun Dafa's acceptance worldwide is a good thing that Heaven and Earth celebrate. I sincerely hope that the persecution of Falun Gong in China will end soon, and practitioners in China can also publicly celebrate this great festival.”

Practitioners also presented a Dragon Dance and Waist Drum performance, which drew the attention of many tourists who stopped to watch and have their photos taken. 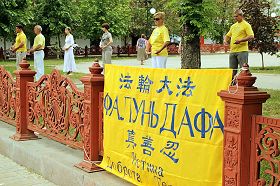 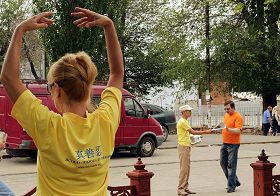 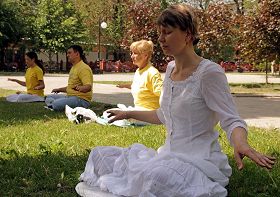 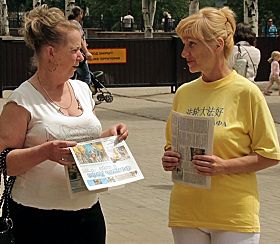 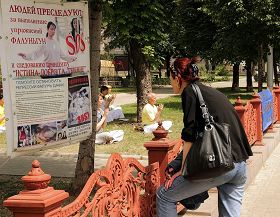 In Donetsk, practitioners did the exercises and introduced Falun Gong in the central park. A middle-aged lady said that she was in tears by the time she finished reading the truth clarification information. “I can hardly believe that Falun Gong practitioners who cultivate Truthfulness-Compassion-Forbearance are being persecuted in China,” she said. She finally bought a copy of Zhuan Falun and hoped to learn more about Falun Gong.

A man told a practitioner that he saw practitioners doing the exercises in the morning when he passed by. He especially chose the same route when he returned home in the afternoon to see such a beautiful and peaceful exercise scene again. He said, “A kind of power pulled me here. Your movements, expressions, and beautiful exercise music deeply impressed me.”