When the Chinese Communist Party started to persecute Falun Gong in July 1999, I was still serving in the Panzhihua City Armed Police Forces Division as a a captain. Because I refused to give up the practice of Falun Gong, I was locked in a solitary cell for 15 days. At the end of the year, I was fired.

In March 2000, I was arrested by the head of Yuexi County Domestic Security Division, Luo Jing, and others. I was held in Yuexi County Detention Center for over three months. During this time, I had to sleep on the cold, wet ground for long hours and this caused the muscles on my calf to shrivel. When I was released, the detention center extorted 2000 yuan from my family.

Sentenced to nine years in prison

In January 2001, I was forced to leave home to avoid further persecution. On September 6, 2002, I was arrested on the train by police officers from Panzhihua City Domestic Security Division. That night, I was taken to Miyi County Detention Center in Panzhihua City. I was beaten, and my hands were kept handcuffed behind my back the entire night. The next day, I was transferred to Yanbian County Detention Center in Panzhihua City. Because I refused to cooperate with them, I was viciously beaten by deputy head Zhang from Panzhihua City Domestic Security Division. Later on, I went on a hunger strike to protest the persecution. On the fifth day, I was brutally force-fed. They pried my mouth open using a pincer and poured liquid food down my throat. 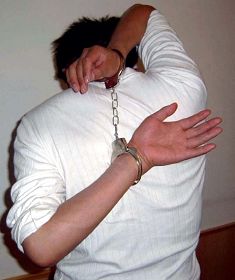 Torture Re-enactment: Handcuffed behind the back

The next day, Tian Ping, head of Dong District Domestic Security Division in Panzhihua City, and two men put cuffs and shackles on my hands and legs as well as a black cloth over my head. I was secretly taken to another place for interrogation and torture. In the process, they took away my bank card containing over 7,000 yuan in savings, my cell phone, and other belongings.

Persecuted in Deyang Prison in Sichuan

From September to October 2003, I was incarcerated in Deyang Prison in Sichuan. I was subjected to all kinds of physical abuse and torture because I refused to recite the prison rules or sing prison songs. The forms of abuse included standing upright facing a wall for long periods of time and jogging for long hours. If I did not jog, guard Cui Weigang ordered convicts Qiu Chongjun and others to grab my arms and drag me along, running. The guards also ordered convicts to monitor practitioners 24 hours a day and forbade us from doing the Falun Gong exercises.

The Torture I Suffered in Wumaping Prison

After I was imprisoned at Deyang Prison for over two months, the police secretly transferred me to Wumaping Prison in Muchuan County, where I continued to be persecuted. In early September 2007, I was taken to the No. 4 ward at Wumaping Prison. An intensive training team was formed in No. 4 ward to intensify the persecution of practitioners. The floor and walls were covered in slate. In the hot sun, the slate floor became as hot as heated iron plates. Practitioner Zhu Zhaojie's feet were seared by the slate floor. In winter, the slate floor became extremely cold, just like ice.

I was sent to solitary confinement for not cooperating with the guards. Guard Gao Hu instructed convicts to strip off my clothes and forced me to wear the prison uniform. Gao Hu and another guard, Zhong Shibin, summoned me for a “talk” from time to time. I was in solitary confinement for over a month and subsequently I went on a hunger strike twice, each lasting four to five days. After I was sent to perform slave labor in the factory, Gao Hu ordered Zhang Ji and other convicts to monitor me in order to prevent me from doing the exercises at night. 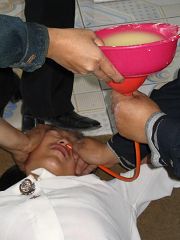 One day in 2008 after I refused to wear the prison uniform, Gao Hu sent me to solitary confinement for 13 days. Nearly every guard was mobilized to participate in this strict management program. Guard Gao Hu and deputy political head Wang Yijun ordered four convicts to hold me down on the slate sitting cross legged. I refused to eat, and guards Yang Xilin and Gao Hu ordered convicts Zhang Ji and others to grab me. Then they told convict Hu Dajian to insert a tube through my nostril into my stomach. During that time, I was only allowed to wear a pair of pants suited for autumn and a sweater. It was so cold the wet towel was frozen and covered in ice and yet I had to sit on the icy cold slate.

At the end of 2009, inmate head Xiao Bin sent me to solitary confinement, where I was under strict management for 17 days. Every day I had to sit cross legged for nearly 19 hours and only allowed to sleep about four hours a day. I was locked up in the No. 4 ward for nearly four years. During this time, the guards had to use force to take a photo of me, place my thumb print on documents, and get blood sample. By September 5, 2011, I had been imprisoned for nine years. Although I was not yet 50 years old, my hair had gone white and my teeth were loose.

“Not Cultivating My Speech Caused Trouble in Another Dimension ”