(Minghui.org) On March 25 2012, University of Arizona organized a “World Traditions Fair Performance,” a small scale performance expo to introduce the traditional dances and cultures of different countries. The Falun Dafa Club participated in the event. 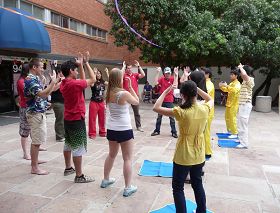 Students at the University of Arizona learning the Falun Gong exercises

The weather was pleasant, and many students came to the fair. Mayer, a Falun Dafa practitioner in Arizona, introduced the students to Falun Gong. Five other practitioners demonstrated the exercises. Some students learned the exercises at the site. A reporter from the university newspaper took photos of the exercise teaching as an example of promoting traditional culture.

George is a new practitioner, and this was the first time he had ever participated in a Fa-promotion event. He handed out paper lotus flowers and talked about his own experiences of practicing Falun Gong and shared his joy at getting rid of cigarettes and alcohol and regaining his life.

The organizers of the event invited the practitioners to attend the fair every year to teach the exercises. The participating practitioners were very happy to see more and more people learn about Falun Dafa.

“Toledo, Ohio: Shen Yun Is a ‘Breathtaking Celebration of the Freedom of Expression’ (Photos)”

“Finland: A Call for Justice in Helsinki (Photos)”