(Clearwisdom.net) On February 25, 2012, teachers and students from the Japanese Minghui School participated in Minuma Ward Cultural Festival held in Saitama, Japan. Their performance and Falun Gong exercise demonstration were welcomed. 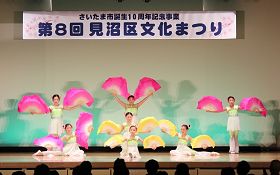 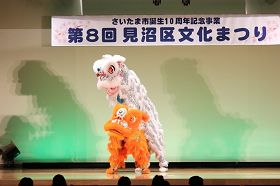 To the music of Celebrating World Falun Dafa Day, young practitioners from Minghui School showed up on stage. Hearing the music and applause, people outside went into the hall to look and take photos. While the practitioners demonstrated the Falun Gong exercises, a practitioner gave a short introduction. Many audience members stood up when the exercise music started and learned the first exercise following the practitioners on stage. After the demonstration, the audience applauded warmly. 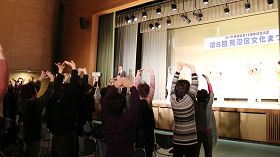 As soon as the Minghui School presentation ended, someone ran backstage and asked to learn the exercises. Some of the spectators had praise for the practitioners, saying such things as, “Your dancing is good. The lion dance is excellent. How can I learn Falun Gong? Where do you have activities? Who can participate in the activities?” Some people said they would join group practice the following week.