(Clearwisdom.net) “I was deprived of sleep for 24 hours. In the cold winter, the prison guards forcibly stripped off my clothes and poured cold water on my head outdoors. They beat me with bamboo sticks embedded with thorns. They played recordings slandering Falun Gong from a loudspeaker beside me. I protested by staging a hunger strike. They force-fed me brutally…” said Falun Gong practitioner Mr. Lin Mingli, who was arrested four times for practicing Falun Gong in China. He was imprisoned in Tilanqiao Prison in Shanghai for six years. Mr. Lin was rescued and traveled to Canada last year. On January 31, 2012, he narrated his suffering of the persecution in front of the Canadian Parliament Building. 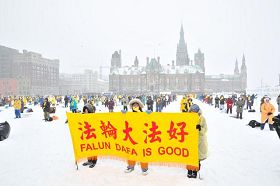 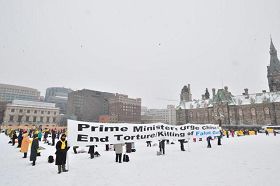 On the square in front of the Parliament Building, Falun Gong practitioners from Toronto, Montreal, Waterloo, and Ottawa held an appeal in the snow to remind the Canadian people to pay attention to the ongoing 12-year persecution of Falun Gong in China. They called on Canadian Prime Minister Harper, who is going to visit China, to put forward the issue of the persecution and to request the Chinese Communist Party (CCP) to release all Falun Gong practitioners who are being persecuted in China, including eleven practitioners who have relatives in Canada.

Members of Parliament Garry Breitkreuz, Rob Anders, Stephen Woodworth and Elizabeth May, and former senior MP and former Secretary of State (Asia-Pacific) for Canada, David Kilgour, came to the press conference and gave speeches. Several MPs dispatched their assistants to express their support. They shook hands and spoke with the practitioners who have suffered persecution in China. Along the path to the Parliament Building, Falun Gong practitioners placed more than 50 glass containers, each of which displayed evidence and stories of Falun Gong practitioners' experiences of persecution. Several of the displays told the stories of practitioners who have relatives in Canada.

Mr. He Lizhi, a resident of Toronto, suffered persecution in China and was rescued to Canada with the help of the Canadian government. But his brother He Lizhong is still imprisoned on a three-year term for his belief. Ms. Zhang Tianxiao, a resident of Toronto, has lost three relatives in the persecution – her sister Zhang Yunhe, brother-in-law Zou Songtao and mother Bi Wucai.

Like hundreds of thousands Falun Gong practitioners, despite suffering six years of torture and brainwashing, Mr. Mingli Lin did not give up his belief. He said in the interview, “Truth-Compassion-Forbearance is not wrong. Why is it being persecuted? Even if I were beaten to death, I would not give up following Truth-Compassion-Forbearance to be a good person, because we are righteous.”

MP Rob Anders came to the press conference and hugged the Falun Gong practitioners who suffered the persecution in China. After hearing the practitioners’ narration of suffering in China, he was moved to tears. 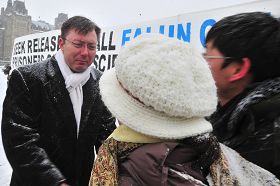 MP Anders said, “For every single one of the people that I have met who was released from jail, we have to remember that they represent a thousand or a million people in their place who are in jail.”

He said that it was important to show support for those people being persecuted, "For my own parliamentary colleagues who are going to China, I would tell them that if they are pursuing trade, that they should not be pulling punches on human rights abuses."

MP Stephen Woodworth: It is wise to return to Truth-Compassion-Forbearance

MP Stephen Woodworth said in his speech, "I want to certainly congratulate you on your efforts this afternoon to be present with us in Parliament on such a cold and stormy day. Your courage and your strength deserve to be commended. I did not want to miss the opportunity to be here with you, I want to do my part to help you remain hopeful in spite of the persecution faced by your loved ones and friends.” 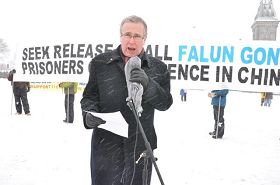 He continued, “When Falun Gong [practitioners] are persecuted, it is because of laws and people who treat them as less than human. This is a principle, that no law that treats any human being as less than human can ever be legitimate.”

MP Woodworth referred to Mahatma Gandhi’s words, "Tyrants and murders will always arise, but they will pass away. And truth and love will endure forever. I know that you are dedicated to truth, compassion and forbearance. These are values that will last forever. When you find yourself becoming discouraged, I think it is wise to return to those values and to remember that they are eternal and in the end they will succeed."

MP Garry Breitreuz: I want to encourage you and support you

MP Garry Breitreuz said in his speech, "I am here to encourage you to continue to defend religious freedom. It is one of the fundamental freedoms that we must all enjoy in order to have a successful society. I want to encourage you and support you.”

MP Breitreuz said later in an interview, “The Prime Minister has started the office of religious freedom. I think that is very important in light of what is happening. Some of the most serious atrocities are happening in China. At the present time, I think we have an obligation to speak up.” 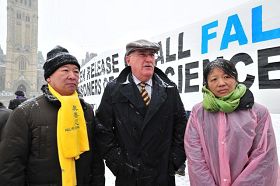 Green Party Leader: I will do anything I can and always speak out on your behalf.

Green Party leader and MP Elizabeth May said in her speech, “I am aware that your practice is truth, compassion and tolerance. It is unacceptable that you should be subjected to torture and imprisonment and harsh conditions, only for following a practice that is liberating to mind and spirit. You have my full support. I will do anything I can and always speak out on your behalf. 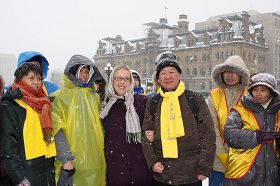 When MP May arrived, the practitioners were practicing the exercises. She said, “Your exercises are quite beautiful against the gently falling snowflakes. You are yourselves like the gentle snowflakes. You do no harm. You do only good. I am so much in solidarity with your efforts.”

Chairman Li Xun of the Falun Dafa Association referred to the 2010 report from Amnesty International in his opening statement: “The ten-year-long systemic brutal persecution against Falun Gong is still going on. The CCP’s persecution is escalating, as are large scale arrests and unfair trials leading to imprisonment, torture and death. The cruelty and brutality of the tortures are beyond words.

“We are here to propose, when talking with the Chinese government on China’s human rights issue, that we must clearly and publicly condemn the CCP’s persecution of Falun Gong and request the release of all Falun Gong practitioners, including eleven of them who have relatives in Canada.”

In a letter to the Prime Minister co-signed by David Matas and David Kilgour, supporters exposed the fact that the CCP uses China’s forced labor system to persecute and enslave Falun Gong practitioners. They called on Prime Minister Harper to urge China to stop exporting products from unlawfully imprisoned people and to end the abhorrent practice of slave labor in China.