(Clearwisdom.net) The International Truthfulness-Compassion-Forbearance Art Exhibition was held on January 10-20, 2012 at a gallery in Kiev, the capital of Ukraine. This was the seventh time that the art exhibition has been held in Ukraine. 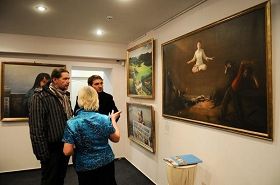 Alexander Briginets, head of the Culture and Tourism Commission on the Kiev Council, visits the International “Truthfulness-Compassion-Forbearance” Art Exhibition

The exhibition was held in an art gallery very close to the Chinese Embassy. The Chinese Embassy tried to block the exhibition, but the art gallery management and Dafa practitioners in Ukraine prevailed and the exhibition was successfully held. A steady stream of visitors came daily. On Saturday January 14 alone, the number of visitors reached over 1,000. The viewers expressed their appreciation of the paintings. Reporters from large media outlets also came and listened to the guides explain each work.

The influential Channel 1 and Radio 5, as well as reporters from other television stations in Ukraine, attended the opening ceremony and published reports that spread the message of the exhibition.

Invited to attend the art exhibition were students, actors, media workers, artists, congressmen, staff from the ministries of the National Security Agency, as well as Ukraine's Supreme National Council Advisory. The exhibition organizers divided the visitors into groups of ten to fifteen and explained the paintings to them. Peter Yushchenko, congressman from Ukraine and the older brother of former President Viktor Yushchenko, and his wife came to the opening ceremony. They attentively listened to the curator explaining each painting for them.

Congressman Yushchenko said later in an interview, “There is a painting depicting a scene of meditation, which shows the awakening of the victim in prison. It's the effect of meditation, but also the light, the light in the communist totalitarian system. We should understand the environment that this painting shows. We (the Ukrainian people) have also withstood such a tragic period.” He continued, “Everyone should see their own values in life, but eternal spiritual values, not only for the Chinese, but also for the Ukrainians, are consistent and unified. A person won't have anything if they don't have God's help.”

He continued, “I believe that the victims [of persecution] in China will be able to miraculously endure this pain and suffering. In the contest of good and evil, evil can demonstrate a large number of forms. People will see that the form is not important, but the connotation is. Communism – it isn't a political party, but a kind of morbid entity. Communism negates the human heart and soul, only emphasizes self, and denies the existence of God and the arts about God. Communism is the maker of all chaos, and thus, endless suffering has been brought about by it. If you are against God, who will you stand together with? There is no third party.”

Congressman Yushchenko concluded, “When we evaluate our own and others' behavior, or evaluate anything, we should think, who has helped these people? Because without the help of angels and the invisible forces, people are weak and incompetent. In history, who helped Lenin, Tuercike, and Stalin? A group of foxes helped them. Who has helped the victims in those paintings? There is no doubt – Angels and Guardian Gods.”

Visitors were drawn by the strong and powerful energy field in the exhibition hall. They had constant praise for the paintings and many even shed tears. Many people lingered in the exhibition hall for a day and were reluctant to leave. A number of people visited the exhibition and then returned many times with their relatives and friends. One of the visitors, an elderly woman, is a cancer patient. The first day that she came to the exhibition, she looked pale and sickly. After viewing all the paintings, she said that she felt very good. She came back the second day and told a staff member that she felt extremely comfortable; she said that she felt light as if floating, like a butterfly, and she simply wanted to fly. Another visitor was deeply impressed by the Falun Gong practitioners' activities and wanted to donate money for the practitioners' efforts to oppose the persecution. Some visitors were surprised to learn about the Chinese Communist Party's persecution of Falun Gong. They said that it was truly evil and it reminded them of the Nazis' persecution of the Jews.

Ukrainian National TV Channel 5 reported on the exhibition on its evening news. The announcer said, “Using artistic forms to touch your heart and achieve an inner harmony, the capital is proud to usher in the Truthfulness-Compassion-Forbearance Art Exhibition. The artists, through the medium of painting, have depicted China's [the Chinese Communist Party] brutal torture and persecution of Falun Dafa practitioners. In the contest between good and evil, people's conscience is challenged.”

The report quoted exhibition organizer Alexandria: “We can see in this painting, the persecutor is giving a Falun Gong practitioner an injection. This practitioner loses consciousness, and his heart, liver, are removed for sale.” The reporter said, “This is not the artist's arbitrary fabrication. Since Falun Dafa began to be persecuted in the late nineties in China, people involved in the persecution harvested organs from (living Falun Gong practitioners) and sold the organs on the black market for large profits. It shocked the whole world.”

The reporter interviewed a visitor to the exhibition, who said, “I like the paintings that reflect the persecution. I think that this should be the essence of the exhibition, to tell people that a lot of innocent people are subjected to cruel persecution. The persecutors are the authorities.” Another visitor told the reporter, “These paintings bring light and love. The painters really put their hearts into it.”