(Clearwisdom.net) Falun Gong practitioner Mr. Shao Qiang is from Qingdao City, Shandong Province. He and another practitioner held a 99-meter-long banner reading “Falun Dafa is Good” and “Truthfulness-Benevolence-Forbearance is Good” on Tiananmen Square in December 2000. For this he was sentenced to a ten-year prison term. Mr. Shao was once driven to mental disorder due to the torture he was subjected to in Jinan Prison. After his release on December 31, 2008, he gradually improved his mental and physical health through studying the Falun Dafa teachings and practicing the exercises. We are now exposing the crimes committed against him.

Between 2001 and 2004, the prison guards often placed Mr. Shao in solitary confinement for refusing to give up his belief. They intimidated and tortured him in a tiny dark room, deprived him of sleep, and stabbed the backs of his hands with needles. They also beat him non-stop until they were exhausted.

Guard Li Wei ordered criminal inmates Wang and Guo to pry open Mr. Shao’s mouth with a metal hook on a chain, used to tie people up. Li then forced his penis into Mr. Shao’s mouth. Next, the gang tied Shao’s right hand and left foot together with a chain for a week, leaving him unable to straighten his back to walk.

Another time Li Wei and a division chief surnamed Wang instigated a death-row criminal and a few others to twist Shao’s arms behind his back and immobilize them with a chain. After brutally beating him, they shackled him and left him in a high-traffic area for passing by inmates to watch. He had no lunch that day. Even today his heels still have visible shackle marks left from that day.

Mr. Shao was transferred to Division Four in early 2003, where guards ordered him to transcribe the prison rules in a small room after a long day’s forced labor.

There were a few times when the guards put Mr. Shao in a tiny dark room after brutally beating him. His only daily food then consisted of two steamed-buns. They left a basin in the room for him to relieve himself. The smell in the confined space soon became unbearable. Each time the guards locked Mr. Shao up in the room, they left him there for a month, during which time he was totally cut off from the outside world. A few practitioners tried to visit him but were told each and every time that he had a mental disorder and was unfit for a meeting. His family also had great trouble seeing him, since the prison officials simply said he was in solitary confinement and no visits were allowed. When they finally were allowed to see him, they found bruises and wounds on his hands, face, and neck. When Mr. Shao’s mother visited him in March 2003 she noticed some scars on his hands. He told her that the guards didn’t allow him to sleep and stabbed his hands every time he dozed off.

When Mr. Shao’s older brother went to see him in June 2004, he noticed that his younger brother’s face and neck were covered with bruises. The brother informed their mother of this disturbing discovery. She immediately went to Jinan City, and stayed for nine days while she filed complaints with various law enforcement departments. Everywhere she went she was told that prison guards were not allowed to beat inmates. She then wrote down all of her observations of her son’s injuries from every time she had visited him, and printed out many copies to send to the various departments.

When she met the director of the local Procuratorate, she urged him to go to the prison to see about her son, to which he agreed. However, when they met again the next day he denied seeing any wounds on Mr. Shao. She differed with him saying, “If they had never beat Shao Qiang, then I would be making false accusations. But if they beat him, but didn’t dare to acknowledge it, they are violating the law even though they have full knowledge of the law.” The director softened his tone and promised her she wouldn’t see any scars on her son in the future. 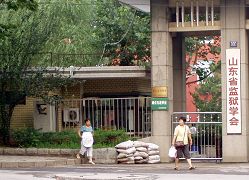 In 2006 a friend wrote a letter to Mr. Shao’s family, detailing his plight in the prison, and urging them to rescue him immediately. After receiving the letter, his family went to see him on July 23, 2006. His mother described his plight on a poster board and then went to display it outside stores and tourist attractions. She also displayed the board outside the Shandong Province Prison Management Bureau for 12 days, and outside Jinan Prison for eight days, effectively exposing the prison’s crimes to the public and frightening the evildoers.

On December 31, 2008, Mr. Shao was released after being imprisoned for eight years.