(Minghui.org) Ms. Li Li and her husband Mr. Wang Huanzhong live in Dianqian Village, Pingdu City Development District, Shandong Province. They were arrested on July 24, 2012 by officers from the Taishan Road Police Station, as they passed out letters inviting local people to attend a court hearing on the case of illegally arrested Falun Gong practitioner, Mr. Wang Guangwei. Ms. Li's husband was subsequently given a one-year forced labor term, and she herself was sentenced to four years of imprisonment. Ms. Li appealed the verdict.

Mr. Wang Guangwei from Landi Town was arrested on March 14, 2012, as he was posting information about the persecution of Falun Gong in Majiaxibu Village. The village secretary Qiao Xianpeng reported him to the police, and Liu Naiqiang and other officers from Landi Town Police Station made the arrest. Pingdu Court officials originally scheduled to put him on trial on July 27. Mr. Wang Guangwei's family hired two attorneys from Beijing to enter a not-guilty plea for him. Three days ahead of the trial, Ms. Li Li and her husband Mr. Wang Huanzhong from Dianqian Village passed out invitation letters to local people to invite them to observe the court procedures on Mr. Wang Guangwei's case. Officers from Taishan Road Police Station arrested the couple in Shizhuang Village. Mr. Li was taken to the Taishan Road Police Station.

Early the next morning, Ms. Li's husband was taken to the Pingdu Detention Center where he was held for two weeks. He was then given a one-year forced labor term and sent to Shandong Province No.2 Forced Labor Camp, also called Zhangqiu Men's Forced Labor Camp. On the same day, Ms. Li was taken to the Qingdao 610 Office brainwashing center, where she was persecuted for 20 days before she was transferred to the Qingdao Police Supervision Center, the former Dashan Detention Center. She was unjustly sentenced to four years in prison. She appealed the verdict. 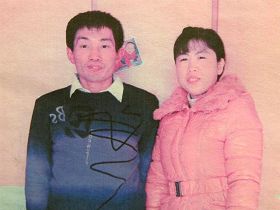 For remaining steadfast in her belief in Truthfulness-Compassion-Forbearance, Ms. Li Li was previously severely persecuted. She was fired from her job, and later incarcerated in a mental hospital for 123 days. She was then subjected to two years of forced labor and four years in prison. Prior to this recent arrest, she was detained for 3 days in January 2012. During her illegal detention, Ms. Li was subjected to various torture methods such as, force-feeding, “exhausting an eagle” (being deprived of sleep for 29 days), beatings, being hung up, administration of poisonous injections, forced to stand or sit for periods of time, placed in solitary confinement and other ill-treatment. Despite all the physical abuse and torture, Ms. Li has remained firm in her belief in Falun Dafa.

“I've Learned How to Differentiate Myself from the “False Me” ”