Although the temperature plunged on December 8, residents of Dortmund came in droves to the City Square to view the world's largest Christmas tree. Practitioners set up an information table along the route leading to the Square, with several demonstrating the Falun Dafa exercises. Directly behind the practitioners were banners with the words “Falun Dafa” and “Truthfulness-Compassion-Forbearance” in both Chinese and German. 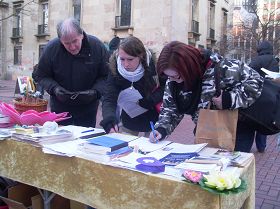 People who knew about the persecution were eager to sign the petition that the practitioners had made available. Another banner said, "Stop Organ Harvesting Crimes in China's Labor Camps" in German. Many passersby stopped to read it.

After listening to a practitioner clarify the truth about Falun Dafa, a young German doctor expressed her support and signed every petition form that the practitioners had available. She also left her contact details, asking someone to contact her with more information about the persecution.

Ms. Boris, a store owner, walked up to the practitioner’s table and simply said, "May I have a few more postcards, please? I would like to place them in my store." She said that she wanted more people know that Falun Dafa is good and to inform them about the persecution going on in China.

A practitioner picked up a few postcards, pointed to one of them, and said, "The lotus flowers on this postcard were painted by Dafa practitioners in labor camps." Ms. Boris said that she admired practitioners for being able to have such pure hearts, even under such adversity. She left her business card, hoping to get more information sent to her about the practice and the persecution. 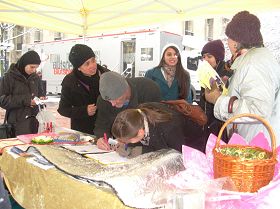 Mr. Hoanke and his friends learn the truth about Falun Dafa

On December 12, Dortmund experienced its first snowfall of the winter season, but that did not dampen the enthusiasm that people had for learning the truth about Falun Dafa.

When Mr. Hoanke and four friends passed by the Falun Dafa information table, a practitioner told them about the CCP's live organ harvesting in China. The group expressed their horror over the CCP's crimes and thought that pirating a person's organs and selling them without their consent was very wrong. They were very happy to sign the petition.

The practitioner went on to tell them that the female practitioner, Ma Ruimei, whose image was on the petition book, was forced to make fishing products for export to Europe. He told the group, “Mr. Guo Jufeng, who is standing over there, was tortured and imprisoned in three different forced labor camps in China. Twelve of his friends were persecuted to death.”

The practitioner continued, "China's human rights situation has always been terrible, but it seems to have gotten a lot worse recently, especially with regard to the persecution of Falun Dafa practitioners. For example, in July, approximately 40-50 practitioners were seized in Dalian City, Liaoning Province. In September, nearly 20 practitioners were arrested in Fushun City, Qingyuan County."

Mr. Guo Jufeng added, "I am very worried for these practitioners, because when I was persecuted in China, the police closed the door and the curtains and tortured me without restraint. Ms. Zhao Juan, my high school teacher, was a very nice lady. After practicing Falun Dafa, her 10-year-old stomach problem and serious neurasthenia miraculously disappeared.

“Nevertheless, the police still arrested her eight times and imprisoned in labor camps three times, simply because she wouldn't give up the principles of Falun Dafa: Truthfulness-Compassion-Forbearance. After being harassed on numerous occasions, she was forced to leave her 20-year teaching profession. She is now imprisoned in a labor camp in Heilongjiang Province."

The five thanked the practitioners for making this information known to them. Many people learned the facts about Falun Dafa over the course of the two days.