(Minghui.org) Today's news from China includes incidents of persecution that took place in 6 cities or counties in 5 provinces. According to this report, 1 practitioner was subjected to mistreatment during detention, and at least 5 practitioners were illegally arrested. 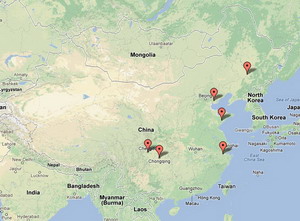 Ms. Yang Huili was recently arrested and taken to the Caiyudajie Police Station. She is being held in the Third Detention Center.

Ms. Yang Jie was arrested in Xihu Resort at the beginning of November 2012. Ms. Yang has been persecuted by the Hangzhou 610 Office many times. She has been detained in a forced labor camp and prison for a total period of over seven years.

Ms. Gao Xu'e, 51, from Huangqi Residential Area, Xincheng District, Jiaozhou. Was arrested on the morning of November 19, 2012, by officers from the Sanlihe Police Station. Her home was ransacked. She is being held in the Jiaozhou Detention Center.

Ms. Li Zhongfang was arrested in Qingquan Town, Qingbaijiang District, by officers from the Qingquan Police Station on August 1, 2012. She was held in the Qingbaijiang Detention Center for 15 days. Ms. Li went on a hunger strike to resist the persecution, but was force-fed by four male guards.

On the afternoon of October 9, 2012, Ms. Li suddenly felt short of breath and very weak. The guards sent her to the Xinjin County Hospital. She was diagnosed with acute pneumonia. To avoid bearing responsibility for her deteriorating condition, the detention center then told Ms. Li's family to pick her up.