(Minghui.org) Mr. Cao Yang was a 24-year-old scholar at the Dalian Foreign Language Institute in May 2001 when he was illegally arrested for practicing Falun Gong. He was sentenced to nine years of imprisonment and subjected to slave labor, brainwashing and torture while in prison. In August 2012, he was arrested and detained again. Below is a partial account of the persecution he and his family have suffered for their faith in Falun Gong.

Mr. Cao was born in 1977 and lives in Xinmin City, Liaoning Province, with his wife, Ms. Hui Liqi, and their newborn daughter. His parents, Mr. Cao Guangfu and Ms. Zhao Min, work at a hospital. The whole family practices Falun Gong. 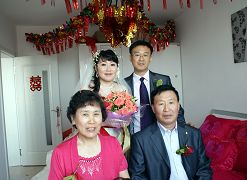 Mr. Cao Yang with his wife and parents

Family detained and tortured for their belief

The Chinese communist regime launched a brutal campaign to eradicate Falun Gong in July 1999. Mr. Cao went to the Beijing Appeal and Petition Bureau in October 1999 to appeal for the right to practice Falun Gong. He was detained at the Beijing Office of Liaoning Provincial Government, but managed to escape.

In November 1999, Mr. Cao went to the Beijing Appeal and Petition Bureau together with his parents. The family was detained at the Beijing Office of the Xinmin City. Mr. Cao and his father were then transferred to the Xinmin Detention Center, while his mother was held in the Shenyang Fifth Detention Center. They were released seven days later, after officials extorted 5,000 yuan in cash.

Mr. Cao and his parents were arrested by officers from the Tiexi District Police Station in Shenyang on May 2, 2001. The officers ransacked their house and looted their computer, printer and other personal belongings. In police custody, the perpetrators hung up Mr. Cao and his father by the handcuffs, shocked them with electronic batons, and tortured them. The policemen said, “If we kill you, we'll just say that you committed suicide!”

Mr. Cao's mother, Ms. Zhao, was held at the Shenyang Detention Center for two months and then sent to the Longshan Forced Labor Camp in Shenyang for two years. At the labor camp, she was subjected to brainwashing and forced to squat for long periods of time. She was also brutally beaten. Her feet and legs became swollen and she could not walk as a result of the abuse. She was not allowed to sleep for eight consecutive days and nights, and later she was forced to do slave labor and make products containing toxic materials. Sometimes she was forced to stay up until midnight to finish the work. She was not released until September 23, 2002.

Mr. Cao and his father were initially sent to the Tiexi District Detention Center in Shenyang, but his father was subsequently transferred to the Zhangshi Detention Center for one and a half years. There, he was severely mistreated. For the first two months, he was not given enough to eat, was deprived of bathroom use, and was not allowed to speak to anyone. In July, when the weather was very hot, he was also not given any water to drink. After two months, he became extremely thin. He was released on May 3, 2002.

Mr. Cao was held at the Tiexi District Detention Center for more than a year. He was then sentenced to seven years of imprisonment in July 2002 and sent to the Liaoyang Dengtahuazi Prison. Every day, he was forced to perform slave labor for up to twelve hours. After it was discovered that Mr. Cao Yang had brought Falun Gong teachings to the prison, he was locked up in solitary confinement for six months in a one-square-meter cell. He was also handcuffed and shackled for more than three months. Afterward, two more years were added to his prison term and he was transferred to Dalian Nanguanling Prison. He was released on January 7, 2010.

When Mr. Cao's mother took a train on April 11, 2008, she was reported to the railway police for speaking to people about Falun Gong. She was sent to the Hailar Railway Police Division, and her personal belongings and money were confiscated. She was detained at the railway detention center for more than a month. Afterward, she was sent to the Inner Mongolia Zhalaiteqi Labor Camp for one year.

In October 2010, not long after being released from prison, Mr. Cao married Ms. Hui Liqi. In November 2011, the couple welcomed daughter Tian Xin. At that time, Mr. Cao was teaching at the Shenyang City Lion Modern School of Fine Arts, and his wife stayed home in Xinmin City to take care of their daughter.

When Mr. Cao was busy working with students on August 28, 2012, he was arrested by officers from the Shenyang City Domestic Security Division. While he was being arrested at the school, police ransacked his home in Xinmin and arrested his wife. The police confiscated the couple's computer and other personal belongings. Mr. Cao's wife was later released. Mr. Cao has been detained at the Xinmin City Detention Center.