Audio recordings could be heard outlining the CCP's 13-year, national campaign to brutally persecute innocent Falun Dafa practitioners. Graphic banners and display boards were also used to show some of the CCP's atrocities. Passersby stopped to view the displays and listen attentively to the recordings. Some people burst into tears, showing sympathy for the practitioners in China. Others asked to sign a petition condemning the CCP's senseless persecution. 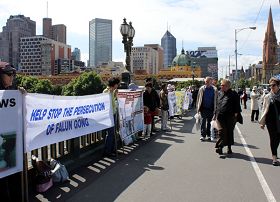 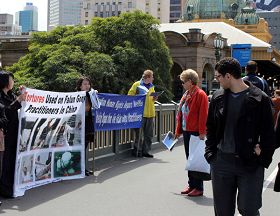 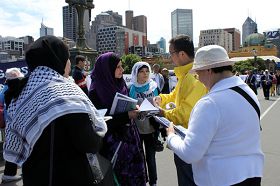 People find out more about Falun Gong in downtown Melbourne 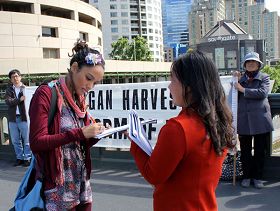 Simon, a local practitioner, said that Camilla Allen signed the petition on her own initiative. Although Ms. Allen said that she had once stayed in China for a year, she was unaware this crime against humanity was taking place there. “Everyone should be aware of this, and stop the atrocity of live organ harvesting,” she said. Being shocked and saddened, she could not hold back her tears.

Practitioner Ms. Gu said that a man in his 50s signed the petition while overwhelmed with grief after viewing the graphic banners and display boards. He said he hoped his signature could help end the barbaric practice of organ harvesting as soon as possible.

Ms. Gu explained, “Many visitors asked why we are here, and what Falun Dafa is all about. After they learned the truth, they wanted to sign the petition to support our efforts to end the persecution.”

Amba Romb from Adelaide, the capital city of South Australia, works in the government's public transportation sector. She took a long time to carefully read each banner and display board.

She told a reporter, “This activity is very meaningful, as it helps the general public learn about what is happening in China—because the mainstream media seldom covers this. I had never heard about this [persecution]. It's terrible. We should be aware of what is going on in the world.”

A young music playwright, Dean, was on his way to a park when he passed by the Princes Bridge. He, too, stopped to sign the petition. He told a reporter that although he had seen many Falun Dafa protest activities over the past years, he had no idea what role his signature could play in restoring basic human rights in China. He said that he hoped that his signature could make a small difference.

Thirteen years ago, former CCP leader, Jiang Zemin, started a brutal persecution campaign against Falun Dafa on July 20, 1999, which has continued to this day. Jiang planned to wipe out Falun Dafa in just three months, but out of the practitioners' steadfast belief in Buddha Law, not only did they make it through the persecution, they also spread Falun Dafa to more than 100 countries around the world. By continuing to stand up to the persecution, these practitioners have made millions of Chinese people and CCP officials aware of the facts about Falun Dafa. They have also awakened people's conscience outside of China to work together to end the persecution.

“Becoming a Practitioner While Helping to Rescue My Father ”