(Minghui.org) In 2011, oil painter Mr. Ye Shangda participated in the Global Chinese Painting Competition sponsored by NTDTV. His piece “Preparation” won the Silver Award. He came to the United States in December 2011 to claim his award. His family was very happy for him. He stated, “No matter how hard it is, I will keep walking on this path!” He could not have imagined this just eight years ago. 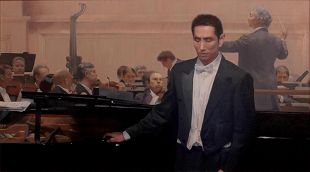 That year, when he was just 28 years of age, Ye Shangda suddenly developed a variety of odd physical symptoms.

He felt that he was always fighting a cold. If he was exposed to anyone who was sick, he was sure to catch whatever it was. He also often had stomach pain and black stools. In bed at night, his hands felt numb. Sometimes the numbness was so intense that he could not feel his hands, and when he adjusted his position, shortly afterward his hands would go numb again. This caused restless nights.

He went to many hospitals and sought Eastern and Western treatment. Nothing worked and his condition only got worse.

After a while, he was very discouraged: “I truly experienced the unpredictable and fragile nature of life.”

A Taoist priest cured him

He later met a friend who told him, “From your symptoms, you might be possessed.” He replied, “I've already tried everything else, why not?" So he followed his friend to numerous temples, went through many ceremonies and an exorcism, until one day he met a Taoist priest who told him, “There is something attached to your body. You mistreated it in your previous life and it is here to collect the debt.” Ye asked the Taoist priest to get rid of it for him. Ye said, “Then the priest began talking to something on my back. I could not understand a thing. After a while, I felt the numbness start in the back of my head and go down my back. The numbing sensation got stronger and stronger until suddenly it disappeared.”

When he got up the next morning, he felt rested, and even energetic! It used to be that even after ten hours of sleep, he always felt tired, as if he had not slept at all. “I could not believe a Taoist priest cured me!” This incident made him believe in the existence of an entity, even though he could not see it with the naked eye. His tribulation was over, but he was still weak. He thought he should practice qigong to become strong again.

What exactly is qigong? Is it for fitness and health? He found many books on qigong, but they were all very vague and mysterious, and no one systematically described what qigong really was. Where was there a true qigong practice?

Finally I found you

Then one day, Ye Shangda saw a book in a store that described the “heavenly circuit” very well and in detail. This was something no other qigong book had ever done with such clarity. That book was Zhuan Falun. “I finally found you!” He was delighted. He finished the book in just a few days. “This book answered so many questions I had had for years. It even changed my view of the world!”

The book particularly mentioned that true cultivation means cultivating your inner self, not searching outward, and the need to abide by the principles of Truthfulness-Compassion-Forbearance. Only then can you improve your xinxing and elevate your realm. This book explained the core issue of how to cultivate and elevate your realm. 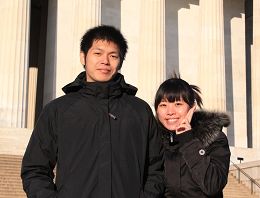 Mr. Ye Shangda and his wife

Ye Shangda said, “When I first began learning the Falun Gong exercises, I felt the energy. It was very powerful. The movements were very solemn and auspicious, and I felt warm and comfortable.” After three weeks, during the second exercise, he suddenly felt there was a Falun rotating inside his body—it went from his hand to his abdomen. He thought it was amazing. “Is it real or my imagination?” In the next few months, he could still feel the Falun rotating inside his abdomen. His health was also improving. He believed. “It is real!”

He is now very healthy. “I used to catch a cold every month. Doctors told me it was due to my weak constitution. I thought this was how I would always be, all of my life. I can hardly believe after practicing Falun Gong that all my illnesses have disappeared.” It has been over seven years now, and he has not had to use his insurance to see a doctor or taken any medicine. His blessings were not only with his health: his oil painting abilities also improved.

The path of an artist

Ye Shangda did not care much for school when he was a child. He spent a lot of time playing video games. When he was in eighth grade, during summer break, his godmother took him to an art class. He fell head over heals in love with painting that summer. He is very grateful to his godmother for introducing him to art.

He went to Taiwan Art College and majored in Western Painting. He said he was not interested in anything else besides painting. After graduation, he set up a painting studio with his friends. He taught painting, and, in his spare time, he created his own art. It was difficult for him to stay focused on his painting, because he had many desires and was tempted by them, until he began cultivation. He said, “After I began to cultivate, it is now easier for me to settle down.”

How can one settle down and become peaceful after cultivating Falun Gong?

“Whenever we come across something, we judge if it is right or wrong through the notions that we have accumulated over a long period of time. After cultivation, we abide by the principles of Truthfulness-Compassion-Forbearance. We look at those things and draw different conclusions. It took a while, but, over time, I started to look at what I wanted to do to see if it fit in with these new principles. If they did not, I would try my best not to do them. I discovered that I was changing."

After a period of cultivation, he discovered that he cared less for material possessions or the pursuit of leisure. “I feel getting rid of attachments is very important.” “We spend a long time studying the Fa and doing the exercises every day. That helps one naturally settle down and be able to reach tranquility.” “With painting, you need to feel it with your heart. If you are not able to quiet your heart, you will not be able to feel and experience the rhythm. You have to really pay attention, then when you begin painting, it will be different. I was not able to reach that state before, and my paintings were very superficial. I was not able to pay attention to the details. But when I am able to reach tranquility, I can experience the most intricate details.”

Finding my True Self

Ye Shangda said, “I used to think painting was to express yourself, your feelings, and emotions. After I began cultivation, my hope was to express compassion through my painting." Before, his goal was to create something different from other artists, just to be different. “I do not think that way anymore. As long as you search within, find yourself, and know yourself, your work will be different. Each individual has his or her own character, and, as long as you are able to find yourself, your painting will have your character.”

“I have found myself, my true self! I will continue to learn and do my best.”

The Global Chinese Painting Competition gathered realist painting experts from all over the world. To win the silver award in such a competition is a great honor.

Ye said, “The person in the painting is my cousin who is doing voice training. I wanted to express his mindset; his preparation before the performance; his focused, peaceful, and prudent state.” “It took me six months to finish this painting.”

In current art colleges, most people focus on modern painting. Why did he choose classic realist painting? “I like the classic paintings. They are very interesting, and they make you think. You can see their thoughts and feelings through the painting, and see their arrangement. Plus they are suitable for all ages. They all know what you are trying to express.”

In ancient China, Chinese followed the Way, the Tao, whether the person was a merchant or a doctor. Painting is also a form of cultivation. “I used to care too much about the final product and not enough about the painting process. After cultivation, I realized the product is just the end point of the painting process. During the process, when one comes across a difficulty and then overcomes the difficulty, you improve your xinxing. Even if the product is not that ideal, I still believe it is a wonderful piece. Because the 'fruit' does not form on the painting, it is like the fruit status of cultivation: the importance is the elevation of xinxing during the process. That has been the biggest change in my mentality during the creation of my paintings.

“I felt my xinxing improved a lot during the process of doing this painting. When I finished this piece, I felt happy and had a sense of accomplishment!”