(Minghui.org) The Art of Zhen Shan Ren International Exhibition was held in Japan's Hiroshima Prefecture Cultural Center on October 6-10 and Hatsukaichi Art Gallery on November 7-11, 2012. Presenting the story of Falun Gong, a spiritual discipline based on the principles of Truthfulness (Zhen), Compassion (Shan), and Tolerance (Ren), the exhibition has been viewed in over 500 cities around the world since 2004.

Despite millions of people benefiting physically and mentally from practicing Falun Gong, the Chinese Communist regime launched a brutal campaign to eradicate the practice in 1999. The persecution is still continuing today.

“Hiroshima people promote peace, but know little about the brutal persecution in China. Each one of us must become a live, mobile media, spreading the news about the persecution of Falun Gong, not only for the sake of those imprisoned for their faith, but also for our families and friends,” said Mr. Ishibashi, a Hiroshima Prefecture council member, at the opening ceremony of the exhibition in the Hiroshima Prefecture Cultural Center. 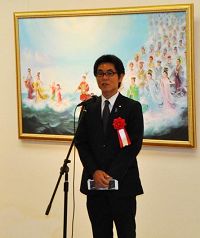 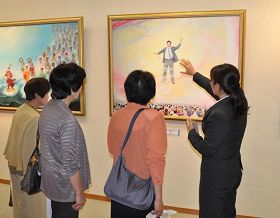 Exhibition guide (right) explains the theme of the paintings to attendees. 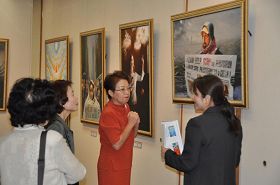 Regarding one of the paintings, the chairman of the Hiroshima Art Salon said: “After seeing the eyes of the mother who lost her son [due to the persecution], I cannot just ignore the injustice that I see; I have to stand up for what is right.” He added: “I then looked at the painting Moving Universe, which made me feel as if I was standing between Heaven and Earth. Everything in the painting is changing and moving forward. I felt as if he is creating the future for mankind.”

Another guest echoed the sentiment. “I think he is creating the future,” she said after viewing the Moving Universe. 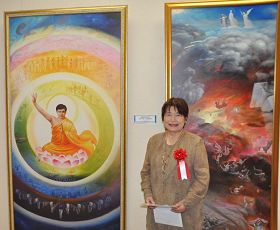 After viewing the painting Moving Universe, the lady said, “I think he is creating the future.”

One attendee brought his whole family to the exhibit, after first seeing it himself.

Another, from Hatsukaichi City, said: “When I saw these paintings, I was very surprised. This issue is so big, and we know so little about it. I will tell my children and others to come to see the exhibition. I hope that you can keep up the good work.” 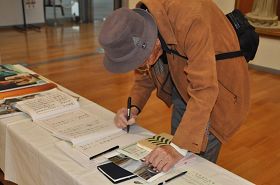 An attendee signs the guest book.

Some people signed the guest book to express their thoughts and feelings about the paintings, and some also signed a petition calling for the end of the persecution of Falun Gong in China.