(Minghui.org) A practitioner in India who travels widely to introduce Falun Dafa and clarify the truth recently spent four months in Ladakh, a mountainous region in northwest Jammu and Kashmir in northern India. Something quite unusual happened this time which repeated itself in various ways at different times during the practitioner's stay in the area. In short, it was as if Master was giving hints and suggestions through the local people, encouraging the practitioner to spread Dafa. 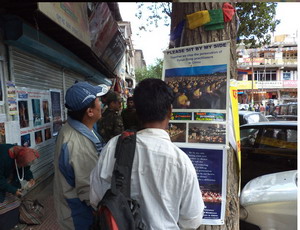 Truth-clarification display on a busy street in Leh

Falun Dafa displays continued to be held on Sundays on Main Street, also called Main Bazaar, in Leh (the main and only town in Ladakh). A great many schoolchildren, teachers from villages near and far and from Leh itself, as well as many other locals and tourists pass by this street, especially on Sundays. The Falun Dafa display had already become a fixture, as it had been held for so many Sundays at the same place. Schoolchildren were just delighted to see this display again and again. Those who had already been introduced to Falun Dafa in their schools sometimes sang “Falun Dafa Hao” (“Falun Dafa is good”). A number of children asked the practitioner to visit their school or to come again.

People Have a Heart to Spread Dafa

The practitioner planned to put up the poster "Sit by my side" in English and Hindi in several places. While starting to put up a few of these posters in a nearby locality, so many people in shops, restaurants, and guest houses came up to the practitioner and told her that the posters could be put up in their shops again this year, and they kept reminding her when they saw her again a few days later. This kept on happening, so she then decided to spend more time doing this.

The manager of a chain of hotels told the practitioner she could put up the posters in each of his hotels. Also, this year, so many people said that they had seen these posters "everywhere." One school principal said that he had “seen Falun Dafa everywhere,” but did not know what it was all about. He was very happy when the practitioner went to his school to introduce Falun Dafa.

The practitioner had plans to have just a few displays on the main bazaar, around July 20. But again, a boy working in a bookshop nearby hinted to her so clearly and innocently about the display, that she decided to go ahead with more displays on the main street, and it was indeed very successful.

At the display on the main bazaar, people from places very far away eagerly asked for Falun Dafa materials to take back home and distribute. It was definitely Master’s arrangement that these materials reached so many far-away places and people.

One Dafa Lamp Lights Up Many

This year Falun Dafa was introduced to 13 schools in and around Leh. The schools included large and small ones, the smallest having only 17 children, and the largest thousands. The schools were mostly in villages around Leh, and some were in Leh town itself. In all of these schools, all five exercises were practiced by the children and many teachers. The human rights issues facing practitioners in China were clearly discussed in each of these schools, with displays of photos or images of paintings by practitioners, depicting the persecution and practitioners' steadfast faith in the face of persecution. 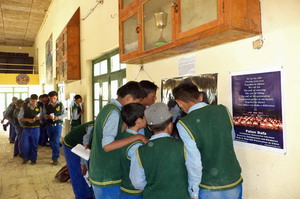 It was a new experience for the practitioner to just hold up various posters and explain to the children the content of the paintings, such as "Why?""Unmovable," "Homeless," "An Orphan's Sorrow," and "Candlelight Vigil,” with the text “Sit by my side.”

It was easy to explain clearly through the pictures that despite this brutality and senselessness of the persecution, there is still so much light, strength, and hope, and no hatred or anger. Through the pictures and the practitioner's explanations, the teachers and many young hearts and minds were moved.

Upon hearing that Falun Dafa had been introduced to many more schools this year, many people suggested that other schools also be included. Sometimes very different people, at different times, talked about the same schools, or the same areas, some of which were very far away. Some principals were already making plans as to how to introduce Falun Dafa to their students next year. 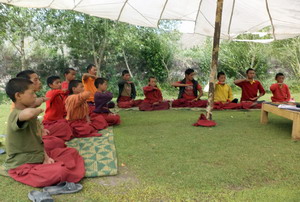 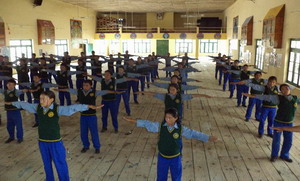 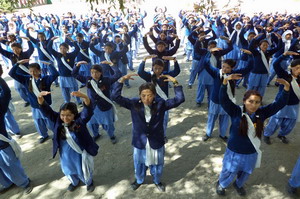 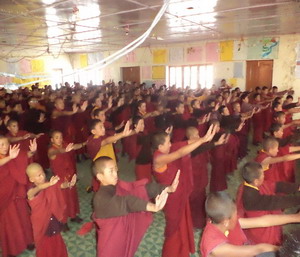 It was really heartening to watch young children doing the exercises so attentively. At one of the schools, many children were in discomfort when doing the standing exercises since it was very hot as the sun shone straight through the windows, but all the discomfort miraculously disappeared soon after the meditation. 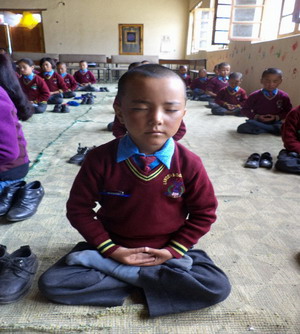 The children loved watching short films on the practitioner's iPad, such as “Falun Dafa around the World,” “July 20,” and others. They found these films fascinating and were so attentive and quiet while watching that one could have heard a pin drop. 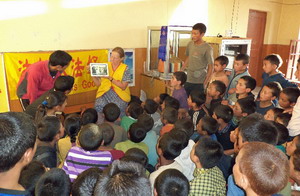 Once, while the practitioner was putting up a Falun Dafa sticker in a public location, a young teacher from a very far-away area passed by and started talking to the practitioner. She said that she knew about Falun Dafa. When the practitioner asked her how that was possible since she lived so far away, the teacher said that at her school a Falun Dafa truth-clarification poster had been put up on the school notice board. Many others passing by the Main Bazaar on Sundays also said that they had already received Falun Dafa information from friends, relatives, colleagues, etc. Through these little stories, the practitioner came to know that indeed, many materials are being shared with others, near and far.

The inspiration to distribute these stories on a wider scale came from a young man who made copies of the DVDs in his Internet shop for the practitioner. While watching the DVD, he found the stories to be so inspiring that he asked if he could give them to his friends, as he felt that young and old alike could benefit. Others were interested in translating the DVDs into the local language. One lawyer, who was already well informed by her colleagues about the ongoing human rights violations in China regarding Falun Dafa practitioners, said that her two young children were very concerned about the persecution. She was also so inspired by the idea of “Ancient Tales of Wisdom” that she said she would put all of the stories on the computers of all the lawyers in the court.

Local People Treat Dafa with Respect and From the Heart

Over the years, Falun Dafa materials have been given to several school libraries. In one school, the book most in demand is Zhuan Falun. Realizing that this was a very special book, the school librarian decided to protect it by putting a plastic cover on the book. This again was a reminder to the practitioner to cover these books before giving them to any library. When giving a Falun Dafa bookmark to any child, the librarian advises the child when opening the book to remember Truthfulness, Compassion, and Forbearance.

Another Round of Unexpected TV Coverage

TV interviews on the local Ladakhi channel had been held in 2008, 2010, and 2011. Therefore, the practitioner was not expecting another interview this year. But once again she ran into the person who had done the camera work in the previous three interviews, and he was so happy to meet the practitioner again that he said very enthusiastically, "We have a new director and I'll introduce you to him. Let's do another interview." So, of course, seeing his sincerity and Master's arrangement, another TV interview was done. The TV program showed photos of schoolchildren of various ages doing the exercises. The focus was on Truthfulness-Compassion-Forbearance, since the traditional values are fast changing in Ladakh. There was also reference to “Ancient Tales of Wisdom,” which impressed the interviewer as well as others present for the interview.

Towards the end of the practitioner’s visit in Ladakh this year, an older man from Holland who was staying in the same guest house as the practitioner came regularly to the daily exercise practice. One day he said, "This is my first time in India. The purpose of my coming to India was only to learn meditation. I feel very good, both in body and mind, practicing the Falun Dafa exercises. I like them very much and now I have fulfilled my purpose for coming to India."

Of course, without the tremendous support, enthusiasm, and inspiration from the local people, introducing Falun Dafa in Ladakh would not have been possible. It is always heartening to get so much support, in so many different ways, from the various different communities in Ladakh. These communities do not always agree with each other on certain issues, but definitely, members of all the communities support Falun Dafa wholeheartedly. We thank all of them and hope that all of these people's futures will be bright, and that “Falun Dafa Hao” will forever resound in Ladakh.

“Minghui Fahui | Cultivation Stories from a Blacksmith and His Wife”