(Minghui.org) Mr. Yang Guoliang, a resident of Qingyang City, Gansu Province, was a former Deputy Chief Commander of the Republic of China. After the communist party took power in 1949, he suffered from numerous forms of persecution. His mind and body were in really bad shape.

In 1997, Mr. Yang began to practice Falun Gong, and regained his health. But two years later the persecution of Falun Gong began, and Mr. Yang he suffered more persecution. On November 25, 2004, he passed away. 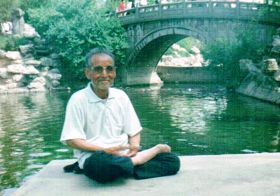 Living in Despair Under the CCP's Rule

Mr. Yang Guoliang was born on September 22, 1926 and was a resident of Miaomen Village, Xiaojin Town, Xifeng District, Qingyang City, Gansu Province. In 1944, he joined the army. In 1948, he was promoted as the Deputy Chief Commander. In 1949, he was able to crawl out from among the dead bodies after a battle. Because he lost contact with his army, he went back home.

After the communists took power, Mr. Yang was unable to live a peaceful life. In 1958, he was labeled with many so-called crimes and sent to a farm for hard labor. Though he was released in 1960, less than a decade later, during the Cultural Revolution, he was again labeled as an anti-revolutionary and brutally persecuted.

Ten years later, Mr Yang's reputation was restored. However, he had a broken body, with many illnesses and a torn heart.

In 1984, his wife died. He was in despair. He wanted to find a cultivation practice and read many books. He also rode his bike to temples to search for the true Buddha scripture, but ended up with nothing.

With years of suffering, his health condition became worse and so did his temper. He often caught colds and later became stooped.

In 1997, after Mr. Yang began to practice Falun Dafa, he became a different person. All of his illnesses disappeared and he became gentle and peaceful. His stooped back straightened. His daughter-in-law said that he used to be picky about food and it was very difficult for her to take care of him. Yet, after he practiced Dafa, he took anything on the dinner table and she felt relieved. His body became light and even his daughter and daughter-in-law were unable to catch up with him while walking. When his daughter saw his change, she too wanted to practice Dafa.

Mr. Yang often went to places far away to promote Dafa and study the teachings of Falun Dafa with other practitioners.

After the persecution of Falun Gong began on July 20, 1999, Mr. Yang and his family became unable to live a normal life.

On February 29, 2000, Mr. Yang Guoliang, at the age of 74, went to Beijing to appeal for justice for Falun Gong. He was arrested and detained in the Xifeng Detention Center for more than a month. On April 18 Mr. Yang, along with fifteen other practitioners from the detention center, were dragged into the street and humiliated. Later, they were brought to the Xiaojin Theater for a huge assembly and were humiliated there again.

When Mr. Yang was visiting a Falun Gong practitioner the next year in July, local police officers Shao Jun, He Guohua, and Jin Jianxun arrested him. Mr. Yang was forced to stand under the scorching sun for more than six hours. The money he had with him was confiscated and he was detained in the detention center for more than a month.

The next year, officials from the Xifeng City Police Department, including Fu Yikui and Zheng Xiang, sentenced Mr. Yang to one and a half years of forced labor. They tried to send him to the Gansu Province Forced Labor Camp, but labor camp officials refused to accept him because of his age. Then the police sent him to the Xifeng District Drug Rehabilitation Institute. At the institute, Mr. Yang became weak after long-term torture. His family repeatedly requested his release, but unsuccessfully. In May 2003, Mr. Yang became emaciated, bed-ridden, and unable to walk. To avoid responsibility, the institute officials released him.

“Falun Gong Practitioners Call for Immediate End to the CCP’s Live Organ Harvesting during the 67th Session of the U.N. General Assembly”