Falun Gong Practitioners Call for Immediate End to the CCP’s Live Organ Harvesting during the 67th Session of the U.N. General Assembly

(Minghui.org) The annual debate of the 67th session of the U.N. General Assembly took place at U.N. headquarters in New York City from September 25 to October 1 this year. In the days leading up to the debate, Falun Gong practitioners came to the plaza just across from the U.N. every day. From September 24 to 29, practitioners held banners, demonstrated Falun Gong exercises, distributed truth-clarification materials to passersby and exposed the Chinese Communist Party (CCP)’s live organ harvesting from practitioners in China. They urged the international community to pay attention to the CCP’s crimes, help stop the atrocities and bring all involved perpetrators to justice. 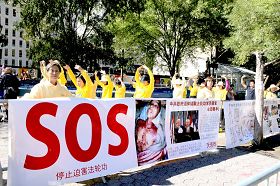 Falun Gong Practitioners Expose the CCP’s Crimes outside the U.N. in NYC

The CCP’s live organ harvesting from and subsequent killing of Falun Gong practitioners for money is being exposed to and condemned by the international community and the Chinese people. During the U.N. General Assembly, local New York practitioners distributed thousands of copies of detailed reports on the CCP’s live organ harvesting to assembly participants. They displayed huge banners in both Chinese and English which read, “Stop Live Organ Harvesting,” “CCP Labor Camps Kill Falun Gong Practitioners for Money and Cremate Their Bodies to Hide Evidence,” and “Such Crimes Must be Punished”. The banners were especially eye-catching outside the U.N. Headquarters and could be seen by assembly participants from afar.

DAFOH initiated this urgent appeal (see https://www.dafoh.org/Urgent_Appeal.php for the full text) about one month ago. The letter urged the U.S. government to pressure the Chinese government to stop the forced organ harvesting. It also called on the U.S. government to make public all information provided by Wang Lijun, the ex-police chief of Chongqing who defected to the U.S. consulate in Chengdu in February 2012.

DAFOH is a voluntary organization composed of medical doctors from various countries. Its executive director, Dr. Torsten Trey, said, “We hope to break the silence and see the U.S. stop being just an observer. We want the U.S. to pay further attention to the organ harvesting matter. We look forward to seeing the international community identify the nature of this matter.”

According to DAFOH, at least 60,000 Falun Gong practitioners have died as a result of live organ harvesting since 2000. Their organs were sold for up to hundreds of thousands of dollars to wealthy Chinese officials or foreigners in need of organ transplants. The appeal letter urged people to help stop the live organ harvesting and to request the U.N. to take note of the crimes.

Dr. Cindy Liu said, “In less than five weeks since we started the urgent appeal on August 21, we’ve collected over 23,400 signatures. It is apparent people long for the truth and they want to see the CCP immediately stop the forced organ harvesting.”

Though a signatory to the Universal Declaration of Human Rights that was passed in 1948, China has never respected the human rights of its citizens. Dr. Wenyi Wang said their purpose of submitting the appeal letter to Ambassador Rice was to remind people of China’s member status and to urge the U.N. Human Rights Council to pressure China to immediately stop the live organ harvesting. She said, “When people learn the truth, they will follow their conscience and make the right move.”

In a 2006 report, human rights lawyer David Matas and David Kilgour, former Canadian cabinet minister and crown prosecutor, pointed out that from 1999 to 2005, more than 41,000 Falun Gong practitioners were subjected to live organ harvesting.

In its annual country reports on human rights practices published in May this year, the U.S. State Department for the first time mentioned the CCP’s forced organ harvesting. During a House Committee on Foreign Affairs hearing held on September 12, senior house member Dana Rohrabacher made it clear that organ harvesting is a crime against humanity and we should do our best to track down every criminal involved in the atrocities and bring them to justice.

The U.S. Homeland Security also officially expressed its concerns over organ harvesting. When foreigners apply for visas to enter the U.S., they now must answer a question on their application form asking if they have been involved in any forced organ harvesting.

The same appeal letter (https://www.dafoh.org/Urgent_Appeal.php) submitted by Dr. Wang and Dr. Liu is also circulating in Congress requesting the signatures of representatives. The petition reads, “We, the undersigned, are concerned about the unethical organ harvesting from living Falun Gong practitioners in China and request the following from the U.S. Government: Publicly release all relevant information possessed by the U.S. State Department about forced organ harvesting from Falun Gong practitioners in China, including evidence Wang Lijun provided to the U.S. Consulate.”