Practitioners Hold March Against the Persecution in Yokohama (Photos)

(Minghui.org) Falun Gong practitioners in Japan held a march in Yokohama on Oct. 21, 2012, passing through the busy downtown area and exposing the persecution of Falun Gong by the Chinese Communist Party (CCP). 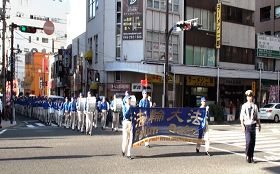 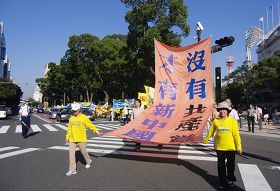 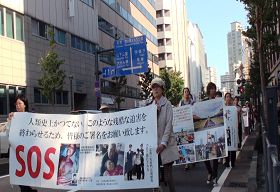 Yokohama is the second largest city in Japan with a population of 3.7 million people. The Divine Land Marching Band led the procession, followed by practitioners carrying banners and a waist-drum troupe. Many Chinese residents looked on as the procession passed by China Street.

An elderly gentleman couldn't hide his surprise when he saw the banner exposing the CCP's crime of harvesting organs from living Falun Gong practitioners. He said, “It's hard to imagine such brutal persecution in China. It is really time to disintegrate the CCP!”