(Minghui.org) To inform the public of the Chinese regime's organ harvesting crimes against Falun Gong prisoners of conscience, starting on October 11, 2012, Falun practitioners in Ireland have continuously collected signatures on streets such as Grafton and O'Connell, the busiest streets in Dublin's city centre. The petition calls for the United Nations to conduct an independent investigation into this matter so as to stop this crime against humanity. Upon learning the situation, many people signed the petition showing their support. 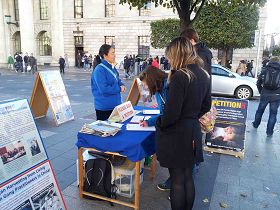 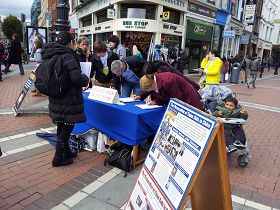 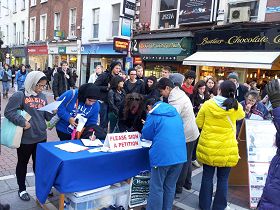 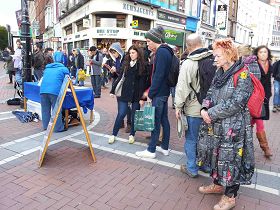 The autumn in Dublin, Ireland is chilly, rainy and often quite windy. However, practitioners have been steadfast in their efforts to collect signatures and raise awareness. Upon learning that the CCP has harvested organs from living Falun Gong practitioners, many people are shocked and feel it hard to imagine that such a crime against humanity has happened in China and has even continued for so many years. While signing the petition, many people have said: "We hope our signatures can make a difference! We wish you good luck! "

A young woman who just came abroad from China not long ago said: "The CCP dictatorship is not good. When I was in China, I did not believe the media propaganda about Falun Gong.” She continued: "They have harvested organs from living Falun Gong practitioners. This is unbelievable! Thank you for telling me about this, I will try to learn more about this. "

Having looked at the banner for a while, a Polish family took the initiative to sign the petition, saying: "Our country used to be under the communist dictatorship, so we are fully aware of the evilness of the Communist Party. We support you!"

While passing by with their child, an Irish couple immediately signed the petition after reading a leaflet, one of them said: “On my way going to work I often see you protesting in front of the Chinese Embassy. What you are doing here today is great. Keep up the good work!"

A Chinese gentleman who had already learned about the persecution from the practitioners bought a few cups of hot tea for them showing his appreciation and support for Falun Gong.