People Now Quitting the CCP in Minutes, Not Days! (Photo)

(Minghui.org) Although Ms. Peng Shumei appears to be an ordinary Taiwanese lady, she's not. Unlike most mothers in Taiwan, she calls China every day, clarifying the truth about the persecution of Falun Gong and instructing people how to quit the Chinese Communist Party (CCP) and its affiliated organizations. She does this out of a deep concern for these people's futures.

When she first started making calls, she used to stutter and tremble while holding the phone. Now, she calmly and peacefully relates her truth clarifying messages over the phone, undisturbed by people's reactions. Sometimes it will take her several minutes to persuade someone to quit the CCP; other times it may take a few days. However, she has recently witnessed a big shift in Chinese peoples' hearts. 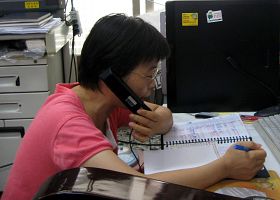 Ms. Peng calls China to clarify the truth about the ongoing persecution of Falun Gong.

Ms. Peng, 53, has been practicing Falun Dafa for 12 years. Since 2007, she's been calling China every day, after work. Many Chinese people firmly believe the CCP's slanderous lies about Falun Gong. In order to effectively expose these lies, Ms. Peng did her homework. Not only did she thoroughly familiarize herself with the CCP's ignominious history, she also read over many transcripts of phone conversations that her colleagues had with people in China. In addition, she compiled her own notes, hoping to give the Chinese people the most comprehensive information available.

From Threats to Trust

Ms. Peng starts her phone calls by saying: “Hi, I am an overseas volunteer and I am calling to help people quit the CCP and its affiliated organizations. Over 100 million Chinese people have already quit. Have you quit, sir/ma'am?”

On one of her calls, a man responded, saying, “Do you know who I am?” She replied, “No, I don't. But the fact that you picked up the phone means that you are a precious person and that we have a predestined relationship.”

He continued, “I am the head of the Beijing Public Security Bureau. Do you know that I would like to kill you? Why don't you come over to China so I can arrest you?” Then he hung up.

Although Ms. Peng's hand was trembling, she was also deeply concerned that he had not understood the truth. So she redialed the number the next day and told him all about the CCP's crimes and tyranny. No matter what she said, he continued to defend the CCP.

However, on the third day, the man's attitude changed. When Ms. Peng talked about the protests of 1989—also known as the June Fourth Incident—the person said that he was in Beijing that day and knew exactly what had happened.

As for the so-called Falun Gong self-immolation incident in Tiananmen Square, he said the CCP's Central Propaganda Department staged the event to frame Falun Gong. “What could I do, even if I knew?” He sounded both frustrated and depressed.

Although he was not quite ready to quit the CCP, he was willing to listen to Ms. Peng. So she called him every day. On the seventh day, the person finally agreed to quit the CCP. He also asked Ms. Peng to call him back, because he wanted to ask his family members to quit as well.

So, in a matter of a week, this man went from threatening her life to basically entrusting her with his family's future.

Ms. Peng does what she does out of compassion and the sincere desire to save people. The money she spends on making international calls; the time she puts in after work making calls; the insults she is subjected to, and the threats that she receives—none of these things matter to her.

One day, a public security officer in Guangdong Province said to Ms. Peng, “Quit the CCP? I work in the public security bureau! I am going to record this conversation and report you!”

Ms. Peng replied, “You want to record our conversation? That is wonderful! You should play it to your coworkers, families, and friends, so that they can understand Falun Dafa.”

Ms. Peng told him the facts about Falun Gong and about the CCP's ongoing persecution. She also gave him the phone number of the Coalition to Investigate the Persecution of Falun Gong and asked him to contact them to share what he knows about the persecution. Ms. Peng believed that the person was listening carefully and agreed to follow her suggestions. Eventually, he quit the CCP and its affiliated organizations.

From Indifferent to Supportive

Besides talking to a lot of mean and rude people in China, Ms. Peng also encounters people who are indifferent to the persecution of Falun Gong. She also talks with young intellectuals who deeply fear the CCP, saying, “It has nothing to do with me. It is none of my business,” and “I have nothing to say.”

Ms. Peng told one young man, “You are worried that you'll be killed or imprisoned, or put in a forced labor camp if you say anything, right?” The young man answered, “Yes, yes.”

She then explained to him, “The CCP is sucking the lifeblood out of China. As long as the CCP is in charge, China will continue to suffer. Please stand up to the CCP and make a difference. Please let all your friends and family members know what I've shared with you. Only when the Chinese wake up will the situation in China change.” The person agreed with her, saying, “Well said!”

Ms. Peng does not remember how many phone calls she's made to China, over the past few years. However, she does know that as soon as people discover the truth about the persecution of Falun Gong, they want to draw a line between themselves and the CCP. They realize that only by quitting the CCP can their futures be bright and their families safe.

In the past couple of years, she has seen a marked increase in people quitting the CCP. Perhaps these people unconsciously sense that the time to make this most important decision is running out.

Ms. Peng believes that this trend is due to the concerted effort of many people clarifying the truth through the Internet and cell phones. Many people she called told her that they knew what Ms. Peng was saying was true because they had been to Taiwan and read a lot about Falun Gong at the tourist spots. Quite often these people quit the CCP shortly after she talks to them.

Ms. Peng smiled and said that it no longer takes her seven days to convince someone to quit the CCP. Now, it just takes a few minutes! Many people even offered to help her spread the word by asking their families and friends to quit the CCP.

She once spoke to a person who had previously heard about quitting the CCP.

Ms. Peng: “Sir, do you want to quit the CCP and its affiliated organizations, in order to be safe?”

Man: “Are you selling insurance?”

Ms. Peng: “Yes, free insurance; it will not cost you anything.”

Ms. Peng: “Sir, you are very smart! You should quickly quit the CCP and its affiliated organizations.”

The person then asked Ms. Peng to help him quit.

Many blue collar workers complained to Ms. Peng about the CCP's overt corruption. One of them said, “These corrupt officials, look at them! They live such luxurious lifestyles. If they run over a poor person, while driving their expensive cars, they won't even stop to lend a helping hand. Our homes are being illegally demolished and our land is being confiscated by the state. Now we have to work odd jobs, just to get by. Our income has greatly decreased!” They also saw the evil nature of the CCP, saying, “Nothing on the news is true.”

People like this often quit the CCP with little or no hesitation. One of them, after agreeing to quit, told Ms. Peng, “Making phone calls is too slow. Send me some information and I will forward it to my contacts!”

She told them, “Everyone should remember their alias. Are there 30 people in your class who want to quit?” The student replied, “No, not yet, not yet. Don't hang up. There are actually 45 students in my class.” Ms. Peng told him, “No one can quit the CCP for another person, unless that person agrees to quit. Have they all agreed to quit?” He confirmed, “Yes, yes.” To be sure, Ms. Peng sent all of them their aliases via text messages.

Over the past five years, Ms. Peng's husband has wholeheartedly supported her phone efforts. He even helps with the housework so that Ms. Peng can make her calls.