(Minghui.org) The 36th Health Expo was held on October 5-7, 2012 at the Municipal Cultural Center of Katowice, a city in southern Poland. Falun Gong practitioners in Poland participated in the event, teaching the exercises free of charge as they always do. They also placed a special emphasis on exposing the forced organ harvesting from living Falun Gong practitioners by the Chinese Communist Party (CCP). Visitors signed a petition prepared by the practitioners to express their condemnation of the barbaric act. 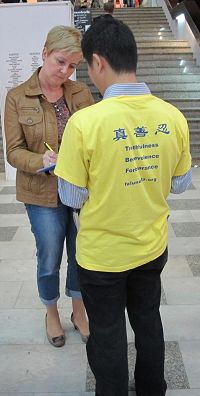 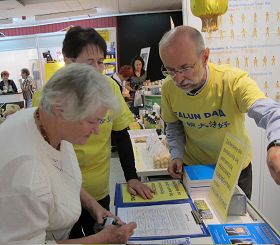 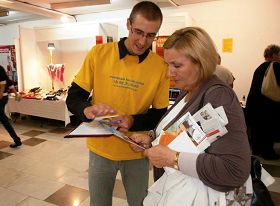 Visitors learn to do the Falun Gong exercises at health expo 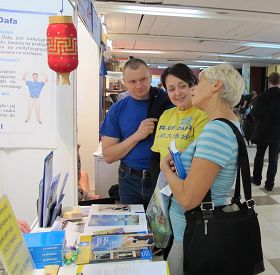 Many people lining up at the entrance to the ticket booth were happy and thanked practitioners upon learning that they could learn to practice Falun Gong free of charge, and many people joined a different line to sign a petition to oppose the persecution after they heard about the brutal persecution of Falun Gong in China.

Different from previous years, many people told the practitioners that they had learned about the persecution from reports on TV, in the newspaper, and on the Internet. They said people should not accept this fact, and it is the responsibility of everyone to oppose and stop the Chinese communist regime from persecuting Falun Gong.

At the instruction site on the fifth floor, visitors came one batch after another to learn to practice Falun Gong. Learners could finish doing the first four exercises with only simple instructions from practitioners. Many people enthusiastically applauded, being proud of their group and themselves for having learned to do the exercises. They also made sure the address of the practice site and time for practicing were correct, and said they would go to join the practice. Many people bought Zhuan Falun and began reading it right away. Some waited until the last, only to give practitioners a hug to express their heartfelt gratitude. They said that they felt an indescribable shock in their innermost hearts when they were learning the exercises. They felt a huge energy that made them feel well both physically and mentally. They had never had such an experience before. Falun Gong is wonderful. The practitioners told them that such a wonderful practice is being persecuted in China, and the practitioners there even had their organs harvested when they were still alive. They hope the Polish people will stand up for justice and condemn the evil deeds. Many people said, “I've signed downstairs,” “I've signed at the exhibition hall,” “I've signed at your booth,” “I signed at the spring health expo,” and “I signed last year.”

Several young men who are Yoga practitioners learned to do the first four Falun Gong exercises to the peaceful exercise music. They felt incredibly amazed, and asked to learn to do the fifth exercise. A practitioner told them that they would feel leg pain during the exercise, they said they once sat in full lotus position for even a longer time, and they didn't feel pain in legs, so they were full of confidence and began doing the fifth exercise to the music. Forty minutes passed, and only one young man was left. He was trying his best to persist, and everyone encouraged him, but he couldn't persist to the end. Falun Gong practitioners still congratulated him, and told the young men that this is cultivation practice, and has profound meaning. They suggested that people read Zhuan Falun, a precious book, which can awaken them to the truth that they wanted to understand, but couldn't before. All of them bought Zhuan Falun, and said that they would go to the practice site to do the exercises, and begin cultivation. They waved goodbye to the practitioners after saying they had signed the petition.

Practitioners distributed nearly 3,000 informational flyers during the expo, and about 800 people signed the petition to condemn the persecution of Falun Gong.

“My Thoughts on Master's Words, “They've Never Been Able to Block the Minghui Website!””