(Minghui.org) The Chinese cultivation practice of Falun Dafa was the theme of the afternoon talk show "Shared with Vihra" on Bulgarian National TV7 on September 20, 2012. Bulgarian Falun Gong practitioners shared with the host of the show their personal stories about how they started practicing, the ways in which they have benefitted from the practice, and how their families have accepted Falun Dafa. The practitioners demonstrated the five exercises. The host of the show and the audience in the studio also joined the exercise demonstration. 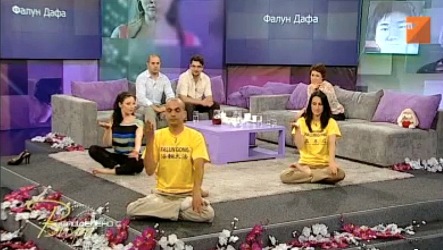 Falun Dafa, also known as Falun Gong, is an ancient Chinese cultivation practice of mind and body that involves exercises to increase the energy in the body and a philosophy based on the principles of Truthfulness-Compassion-Forbearance. Practitioners seek to raise their level of consciousness and morality; return to their the original, true selves; and attain enlightenment. It has been reported that more than 100 million people from all walks of life in 114 countries around the world practice Falun Dafa.

Representatives of the Bulgarian Falun Dafa Association were among the practitioners who took part in the show. They explained why the persecution of Falun Dafa began in China in 1999. For 13 years practitioners in China have been persecuted by the Chinese communist regime.

The persecution continues to this day, despite the practitioners’ efforts to reveal the truth about it worldwide. In China, practitioners have been tortured and imprisoned in forced labor camps, their families torn apart. As a result many children of Falun Gong practitioners have been left orphaned. The Falun Dafa Information Center has reported thousands of confirmed deaths due to systematic repression and torture.

“What Does It Mean to Conform to Ordinary Human Society? ”