(Clearwisdom.net) On January 29, Falun Gong practitioners from Sydney participated in the Chinese New Year Parade held by the Sydney City Government, the largest Chinese New Year celebration outside of Asia. 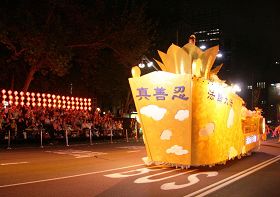 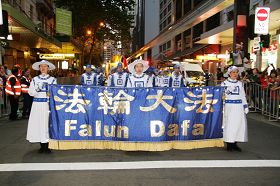 More than 100 groups performed in the parade. The parade took off from City Hall at 8 p.m., went through the Chinatown, and ended at Darling Harbor around 10 p.m. More than 100,000 spectators watched the parade.

The practitioners were warmly welcomed by the spectators. The Divine Land Marching Band led the Falun Gong entry. A large float decorated with golden lotus flowers and lanterns followed the band. Practitioners dressed in traditional Chinese costumes waved to the spectators from the float.

Kelly, a member of the Divine Land Marching Band, said, “I am honored to play in the band. I felt a strong energy in the parade, and never got tired. After playing, I felt that my body was cleansed and my eyes and legs were relaxed. The spectators' applause was the best reward for me.”

Mr. Zhao, a Chinese immigrant from Yantai, China, told the reporter that he and his family come to see the parade every year. He said that they all admire Falun Gong, because this group is very peaceful. Mr. Zhao often sees Falun Gong practitioners in Chinatown, passing out truth-clarifying materials. He added that he hopes that the persecution of Falun Gong in China will end soon.

“Reaching Out across the Taiwan Strait (Part 1)”

“Nuremberg, Germany: Calling for an End to the Persecution (Photo)”