(Clearwisdom.net) September 3, 2011 marked Police Day in Finland. Falun Gong practitioners took this chance to hold an activity at the train station plaza in Helsinki, exposing the 12-year-long brutal persecution of Falun Gong practitioners in China. They set up truth-clarifying display boards and passed out information to the public. They also demonstrated the Falun Gong exercises. Many local citizens signed their petition, expressing their support for Falun Gong. 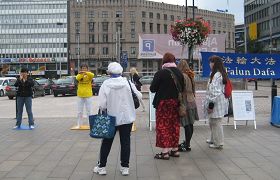 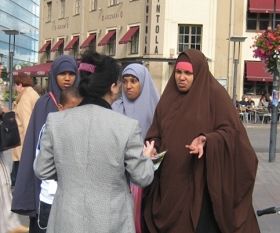 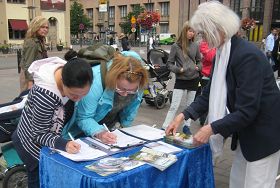 A lady from Hong Kong was interested in the practice and asked many questions. Practitioners told her that many people have benefited spiritually and physically from Falun Gong and she expressed her interest in learning it as well. She said she had seen many Falun Gong parades in Hong Kong. She was shocked by the brutality of the persecution and signed the petition.

Some Westerners asked about Falun Gong, and why it has been persecuted in China. While the Finnish police protect the public, the Chinese police are not trusted as they follow the word of the Communist Party. People in Helsinki could not believe that such a brutal persecution is still going on in the world. Many of them accepted the truth-clarifying materials, and said that they would like to learn more about Falun Gong and the persecution.